The UN Biodiversity Conference in Cancun this year was eventful for the Nereus Program; Principal Investigator Pat Halpin (Duke), Fellow Daniel Dunn (Duke), Fellow Gerald Singh (UBC), and Research Associate Suzanne von der Porten (UBC) all participated and presented at the Thirteenth Meeting of the Conference of the Parties to the Convention on Biological Diversity (COP13), from December 5 to 14. The mandate of COP13 is to implement strategic actions that advance implementation of the Convention on Biodiversity and achievement of the Aichi Biodiversity Targets. 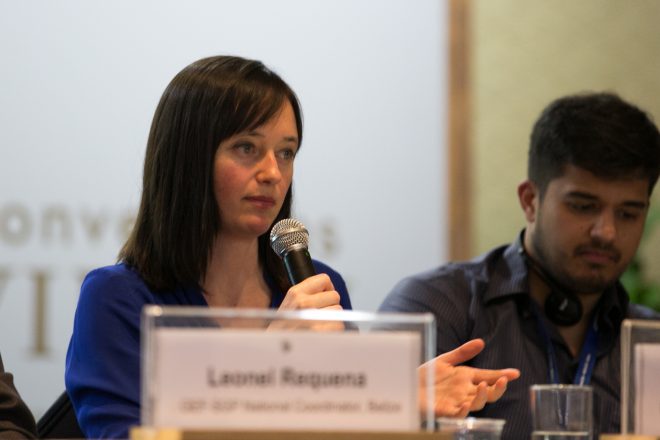 Indigenous Peoples and Local Communities Session
On December 8, Suzanne von der Porten and Gerald Singh (photo) presented at a session entitled “Sustainable Fishing and Protection of Marine and Coastal Habitats” at the Rio Conventions Pavilion. Discussions that day surrounded the themes of sustainable resource use strategies by local peoples, and the relations between local communities with national governments. Of Suzanne’s talk, Gerald notes that the Nereus presence was well-received: “There was a lot of interest in what both of us are doing. I was personally approached by people ranging from representatives of local communities to international organizations with an interest in Nereus work.”

Side event on Ecologically or Biologically Significant Areas
On December 12, Daniel Dunn co-presented at a side event (“Enhancing EBSA Scientific Methodologies and Approaches: The Global Ocean Biodiversity Initiative contribution”) where he discussed his work with the Global Ocean Biodiversity Initiative (GOBI). Several of the initiatives highlighted were the Preparatory Committee on biological diversity beyond areas of national jurisdiction, the Convention on Migratory Species, and the IUCN Marine Mammal Task Force.

The Nereus Program will be participating in a side event at the UN Ocean Conference, June 5 to 9, in New York, USA.