A report entitled “Predicting Future Oceans: Climate Change, Oceans & Fisheries” newly released by the Nereus program, an international interdisciplinary research program aimed at predicting future oceans, suggests that future seafood supply in the world will be substantially altered by climate change, overfishing and habitat destruction if we do not take actions.

In preparation to the COP21 in Paris in December this year where negotiation on limits to greenhouse gas emissions will happen, this report is very timely in highlighting how climate change will affect the sustainability of global marine fisheries in the 21st century. It puts together findings from the Nereus Program on oceanography, ecology, fisheries and social-economics, and concludes that climate change and ocean acidification, along with overfishing and habitat destruction, will lead to a decline in fisheries in many regions and alterations of marine biodiversity and food web structure.

“The types of fish that we will have on our dinner table will be very different decades later compared to now,” said Dr. William Cheung, UBC Associate Professor and the Co-Director of the Nereus program. “Fisheries will be catching more warm-water species, of a smaller size, and that will affect fish supply through our domestic and oversea fisheries as well as imports.”

“Continued CO2 emissions are leading to changes in ocean temperature, acidity and oxygen levels that have been unprecedented over the last several thousands of years, “ said Dr. Jorge Sarmiento, Professor at Princeton University and one of the Principal Investigators of the Nereus Program. “These changes in ocean conditions will affect biological productivity in the ocean, impacting organisms ranging from planktons to fishes.”

While aquaculture will play a role in providing a source of marine protein for a growing global population, the long-term ecological and social sustainability of aquaculture is unclear. An improved framework for global ocean governance will be needed to ensure sustainable fisheries in the future.

“Global marine ecosystems have already been largely altered by overfishing,” said Dr. Daniel Pauly, Professor at the University of British Columbia and an advisor of this research program. “This report clearly points out that any solution needs to deal with the CO2 problem as well.”

It is important to address this urgent issue while we need to understand this is another layer for the burden of global fisheries. The report communicates the urgency and complexity while having concrete appeal to policy makers and other stakeholders.

“The issue of climate change and global fisheries is not the matter of winning and losing but it needs to be tackled with our full capacity to predict future oceans,” said Dr. Yoshitaka Ota, the Co-Director of the Nereus program. “We then need to apply the science and knowledge into innovative policy and practical solutions. For this we need a comprehensive package that can only be delivered by interdisciplinary approaches, which the Program exemplifies.”

Dr. Sasakawa, the chairman of the Nippon Foundation, said that “We are at a critical point. If no effective measures are taken against the current problems facing the oceanic environment, human beings will no longer be able to sustain its economic activities, much less its existence.” He then pointed out “issues with the future ocean, such as the impact of climate change, can not be treated in the framework of conventional science and policy studies. The creation of comprehensive perspectives on oceans in research and capacity building, through programs like Nereus, would be invaluable for our future. I am hoping that the partnership of the Nereus Program continues to make international contributions with capacity building, science network and its innovative cross-disciplinary approach to predict future oceans.”

The report was officially released in a press conference in Japan on June 30, 2015. 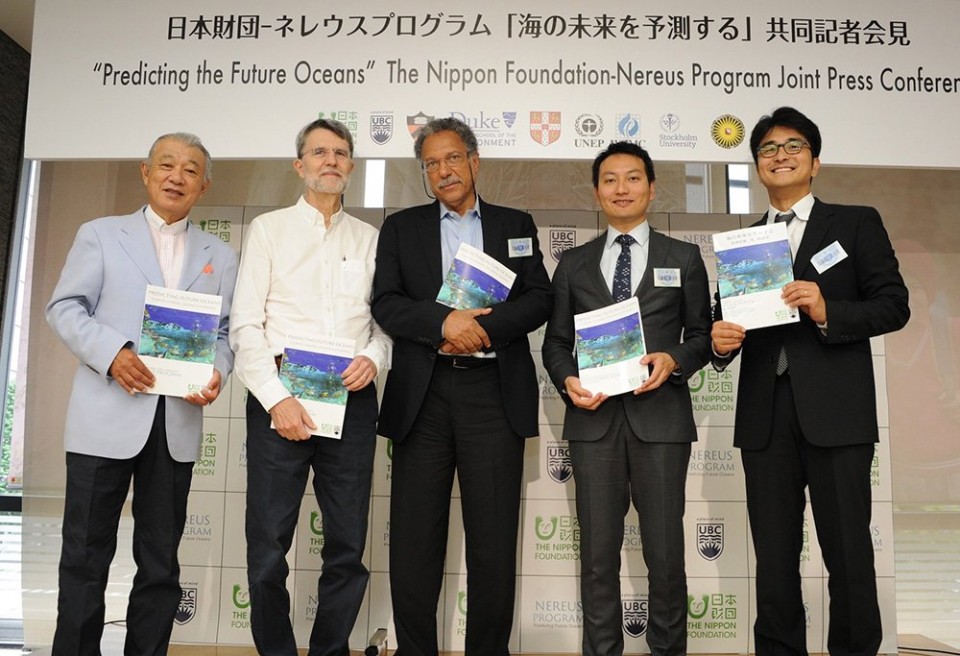 The NF-UBC Nereus Program
The Nereus Program is a global interdisciplinary initiative between the Nippon Foundation and the University of British Columbia that was created to further our knowledge of how best to attain sustainability for our world’s oceans. In addition to the Nippon Foundation and UBC, the Program is comprised of several other partner institutions, including the University of Cambridge, Duke University, Princeton University, Stockholm University, United Nations Environment Programme-World Conservation Monitoring Centre and Utrecht University.
http://archives.nereusprogram.org