Law of the Sea is an important aspect of international law that has implications on state sovereignty, resource distribution, and global fisheries management. Recently, the Philippines utilized the UN Convention on the Law of the Sea (UNCLOS) to assert its marine territorial claims in the Philippines v. China on the South China Sea. In 2013, the Philippines accused China of violating UNCLOS law by taking control of a reef near the Philippine coast, interfering with fisheries and ships and endangering the marine environment. After a multi-year tribunal, in July 12, 2016, the Permanent Court of Arbitration at the Hague published an arbitration award in favour of the several claims brought forth by the Philippines against China. Read more in-depth analysis of this issue.

Alex Oude Elferiink delivered opening remarks and some background on the tribunal’s managing of the issue. He also introduced the two main sessions of the Symposium. The first session was chaired by Erik Molenaar, and discussed China’s non-participation in the tribunal as well as the court’s interpretation of article 121(3) of UNCLOS. 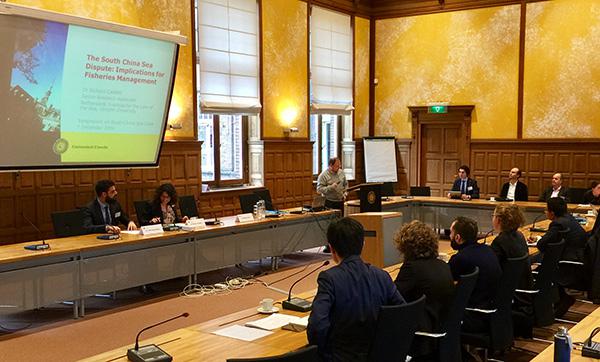 Richard Caddell (photo) delivered a presentation on the implications of the South China Sea dispute on fisheries management. He identified some of the key fisheries-related issues that arose from the case, including the social implications on small-scale Filipino fishermen in the area, and environmental consequences of China’s actions. He concluded that the arbitration award showed some interesting legal decisions with regards to fisheries, for instance the clarification of traditional fishing rights, however the political situation currently remains unpredictable. Richard’s presentation can be found here.