Full immersion in the field of small-scale fisheries for three days, networking with worldwide fisheries experts, coming across old friends from the University of British Columbia, and making new friends, this is what the Centre for Maritime Research (MARE) conference 2015 was all about for me. I attended this conference in Amsterdam from June 24 to 26.

The week leading to my departure was stressful for me. In fact, Air Madagascar’s personnel held a strike at the Antananarivo Airport which could have potentially delayed some international flights including mine. However on June 20, 2015 at 3 am I managed to catch my flight with Kenya Airways and travel to Amsterdam for the very first time. I arrived safely to Amsterdam on the same day.

The MARE conference started with a keynote by Prof. Oran Young, followed by panel sessions. Each panel was covered by seven sessions taking place, happening all at the same time. It was a bit difficult to choose which session to attend. Most of the time, two or three sessions were relevant to the work I am doing. 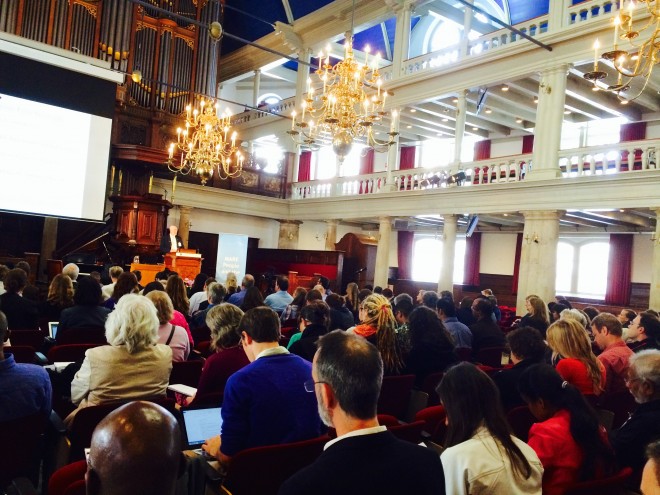 Oran Young, Research professor at the Marine Science Institute, University of California, delivers the keynote presentation at the MARE Conference 2015.

The conference went really well but in order to deal with important issues concerning fisheries, I think we should emphasize more the reality in the field rather than focusing too much on academic theories. These gaps were apparent from the questions asked by participants after the talks. However, there were sessions presenting case studies. An example would be the case of bottom-up governance in Sri Lanka and South Africa which was really helpful for my work. It provided a clear understanding of what the fishermen in those countries are struggling with, in terms of resources access and marginalization in management. I also really appreciated the session about sustaining fisheries through fisherfolk organizations as it helped me compare the network of NGOs and coastal communities that I am coordinating through MIHARI.

Our session on indigenous marine fisheries took place on June 25 in the afternoon. As the participants of the conference were divided in different rooms where the seven sessions were taking place at the same time, we were happy to have our room almost full with attendees looking forward to hearing our presentations. My colleague Andrés Cisneros-Montemayor started the session with the global estimate of marine fish requirements of coastal indigenous groups. It was followed by Miguel Gonzales’s talk on indigenous land and aquatic resources in Nicaragua and Bolivia. I closed the session with my presentation on indigenous fisheries issues and Locally Managed Marine Areas (LMMA) in Madagascar. I was a bit nervous as the definition of Indigenous marine fisheries in Madagascar is still unclear. I assumed I would be the first Malagasy person to make a presentation on indigenous fisheries in Madagascar entail. But I was really amazed by the participant’s feedback. I got about 10 questions after my talk. 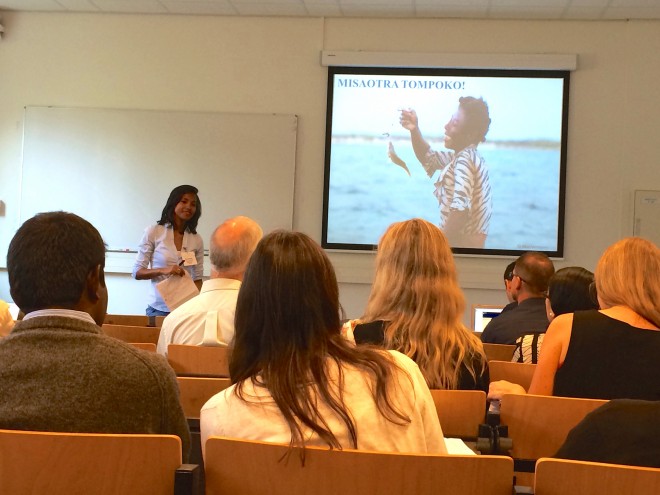 Vatosoa Rakotondrazafy gives her presentation “National Fisheries Governance and Community Based Management in Madagascar” at the MARE Conference 2015.

A discussion followed our presentation. Here are the list of questions and our answers:

Who are indigenous people? What is their status?
Andrés: There are many definitions of “indigenous” and of who is “indigenous”, from academic, government and inter-governmental agencies. We do not even try to re-define this in any way, but use the UN 1983 (Martinez-Cobo) report to form a working definition that is very inclusive, comprising both recognized and unrecognized groups, and small-island developing states. Our global data is being assembled from many available sources, though the most common so far have been ethnographies, government reports, and personal communications.

What are the issues in terms of access to markets and alternative livelihoods for indigenous people in Madagascar?
Vatosoa: Most of the indigenous communities in Madagascar are located in isolated areas, without any transportation. Their opportunities and market accessibilities to sell their catches are limited. So they have to rely on middlemen to collect their catches. But they have to be sold to those middlemen at a very low price. The remoteness of the communities also has an impact on their access to alternative livelihoods, which limits their activities to be based and focused on fisheries only. Their lifestyle limits them also from finding other livelihoods.

What are the concrete ways in which non-indigenous commercial fishers exploit or use indigenous lands and waters?
Yoshi: This is very common everywhere and is the problem. We now know that the coastal resources can further decline because of the effects of climate change so the subsistence fisheries are much more important for the survival of indigenous groups.
Andrés: I’ll only add that in many if not most cases around the world, there are not effective controls on non-indigenous fisheries entering indigenous areas, even in the few examples where these areas have been formally defined or granted at all.

Under what rights can non-indigenous poor communities access and use natural resources in both contexts?
Miguel: Governments are often torn apart on issues regarding mediating access to natural resources in reference to conflicting claims by indigenous and non-indigenous peoples. It is not an abstract issue, but one that is ridden with dilemmas that reflect policy choices and power imbalances that might exist between indigenous peoples, governments and the broader society. The issue must be approached by exploring governments’ responses with reference to both international norms and domestic provisions.

Are the indigenous communities implemented in LMMA (Local Marine Managed Area) management really efficient?
Vatosoa: Considering the growth of LMMA’s numbers in Madagascar with more than 100 discrete management associations today, I believe the communities in charge of them are efficient. They are also provided with trainings and capacity buildings for resources management, which help them to deal with the resources. Also, coastal indigenous communities are the people who know very well the area where they live. As natives from this area, they have passed down from generation to generation knowledge and experience about the appropriate tools to manage the resources they rely on.

How are LMMA implemented in Madagascar and do people feel ownership since they are not officially recognized?
Vatosoa: Community-based fisheries management is supported by the Malagasy Government, but currently no legal framework exists that recognizes LMMAs in Madagascar. Although there is a lack of legal framework, the communities are really motivated towards resource management and consider the resources as their property. However, we are in the process of trying to consolidate different existing frameworks under one legal text for the governance of LMMA.

How can we overcome the issue of indigenous groups and the migrants?
Vatosoa: As solutions, I would suggest a better dialogue between the indigenous communities and the migrants and the promotion of the fact that co-management is in the best interest of all. The migrants should follow local rules as they are not in their hometowns. When the rules are established, the migrants should be consulted and the information should be well spread. There should be also a new arriving migrants rules information system – for example by registering with the village chief, so that he can tell the arriving migrants what are the rules in place. I think also that integrating the migrants in the LMMA management and associations would motivate them to respect more the Vezo culture and way of life. I would suggest also the top down enforcement of fisheries laws, as local management cannot really address the problem. Some migrants are too wealthy and powerful, compared to the indigenous groups.

The discussion showed how interested people were in the topic and how information on indigenous fisheries is still insufficient. In fact, there is still a misunderstanding of what is meant by indigenous marine fisheries. I was really amazed that people approached me to ask more questions. I also heard from some friends that there were groups of people who did not attend my presentation and talked about it amongst themselves.

The next step for me would be to be more involved with the Indigenous marine fisheries group cluster. I was also inspired by this conference to include research on indigenous groups in Madagascar in my PhD. There are still a significant number of non-recognized and marginalized groups in my beloved country of Madagascar whose resources access and management right are weak.

VATOSOA RAKOTONDRAZAFY, MIHARI
Vatosoa joined UBC from July to December 2014 as the UN-NF fellow. She did research on Madagascar Fisheries Governance with Dr. Ota. She is now working for MIHARI (Madagascar’s locally managed marine area network).