While jellyfish, with their soft, gelatinous bodies, may seem like innocuous creatures, when they occur in large blooms they can often cause detrimental effects. Jellyfish blooms have been observed to clog power plants, cause mass mortality to fish in aquaculture farms, burst fishing nets and even sink a 10 tonne fishing vessel. It is predicted that jellyfish will benefit from climate change and other anthropogenic changes, such as overfishing, eutrophication and coastal development.

Warmer ocean temperatures increase jellyfish growth and reproduction rates, while overfishing has removed both their competitors and predators, and increased coastal development provides more areas for the asexually reproducing jellyfish polyps to settle. Although a lack of substantial datasets makes it difficult for scientists to conclusively say whether a global increase in jellyfish biomass has already occurred, local increases have been observed in several areas. In the Yellow Sea and East China Sea, for example, blooms of the giant jellyfish, Nemopilema nomurai, have increased in both their frequency and magnitude since 2002 – likely as a result of a combination of overfishing, pollution and coastal development. 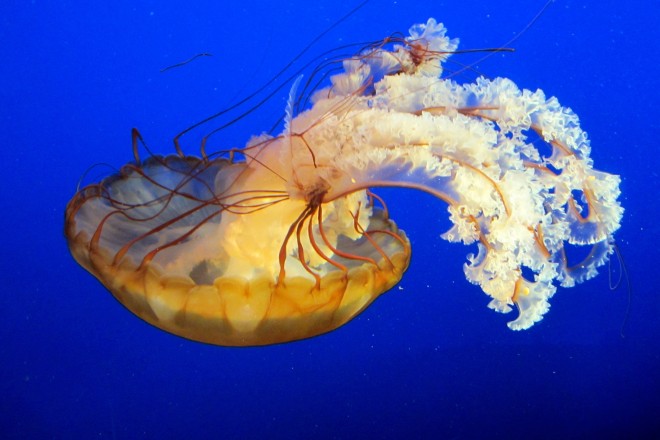 Jellyfish can be difficult to fish as they are extremely variable in their abundance from year to year, which makes investing in infrastructure to create new fisheries a challenge. Image: “Jellyfish” by Eric Bauer, CC BY 2.0.

There have been significant concerns regarding how to deal with these increases in jellyfish biomass – with one South Korean scientist actually inventing a robot that can detect and destroy up to 900kg of jellyfish biomass per hour. Alternative, and perhaps less drastic, methods for dealing with jellyfish blooms are to find increased uses for them. A new paper, “We should not assume that fishing jellyfish will solve our jellyfish problem”, recently published in the ICES Journal of Marine Science, looks at whether fishing jellyfish could help with population control.

“A question I’m often asked is ‘can’t we just eat them if they’re becoming a problem?’” said Lucas Brotz, a co-author with Sea Around Us, a Nereus Program collaborator. “This paper is a thought piece on what would happen if we overfish jellyfish.”

Consumption is by far the largest use of jellyfish, with approximately 1 million tonnes of jellyfish caught in 2015. Regional increases in jellyfish have resulted in new jellyfish fisheries being developed in Mexico and South Carolina. However, while it may be tempting to exploit a resource that is abundant, jellyfish fisheries are not always the most cost-effective or environmentally sound way to reduce jellyfish biomass. Jellyfish can be difficult to fish as they are extremely variable in their abundance from year to year, which makes investing in infrastructure to create new fisheries a challenge. Another barrier to jellyfish fisheries is that only about twenty of the 400 different species are desirable as food, drastically reducing the amount of jellyfish that can actually be fished for consumption. Although other species are edible, previous attempts at introducing new species for consumption have proven to be unsuccessful as their texture and quality after processing is undesirable to consumers.

“Lots of jellyfish species in theory are edible,” said Brotz. “The term I now use is ‘preferred for consumption’. There is a good texture that is desired, after it is processed with salt and alum, it should be crispy, kind of like al dente pasta.” 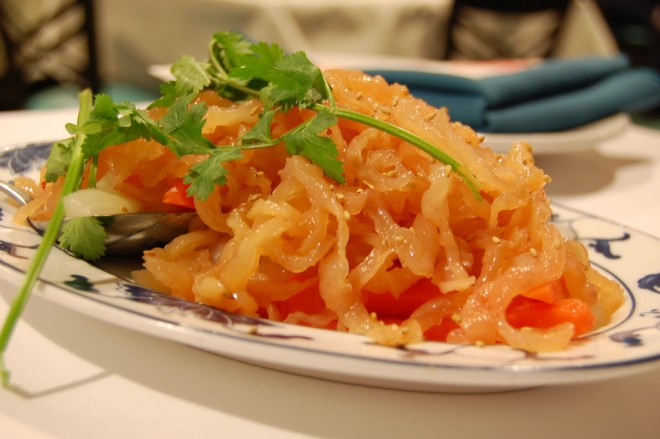 Even if polyp populations could be removed, a more compelling reason to avoid overfishing jellyfish is that we do not know what the resulting ecological effects are. Leatherback turtles have been shown to swim from Indonesia to California – a journey of about 10,000 km or 2 years – just to consume the jellyfish that bloom off the Californian coast, and scientists have recently shown that seabird populations depend on jellyfish swarms to identify where patches of fish are located. Before we can decide on appropriate management plans, we first need to increase our understanding of the roles that jellyfish play in the marine ecosystem to reduce incidental impacts on other marine organisms. Additionally, as the response of jellyfish to anthropogenic factors has been different around the world, management of jellyfish blooms needs to be made on a case-by-case basis. In some cases, it may be easier and more cost effective to reduce these impacts, such as by reducing fertilizer run-off, before more drastic management action needs to be taken.

NATASHA HENSCHKE, PHD, BIOLOGICAL OCEANOGRAPHY, PRINCETON
Natasha Henschke’s background is in biological oceanography, with her research focusing on how gelatinous zooplankton communities respond to changing oceanographic conditions. There is concern that as a result of anthropogenic factors our oceans are shifting from a fish-based to a jellyfish-based ecosystem, however recent reviews have failed to reach a consensus on whether gelatinous zooplankton abundances have been increasing worldwide. In her current work at Nereus she aims to investigate this issue by using earth system models developed at the NOAA Geophysical Fluid Dynamics Laboratory to examine the distribution and abundance of future gelatinous zooplankton populations under different climate and fishing scenarios.