Human-caused stressors such as fishing, habitat degradation, pollution, invasive species, and climate change disrupt marine species and ecosystems, by notably modifying the structure and functioning of their food webs. Specifically, the rapid development of fisheries in the 1950’s caused declines in predators, collapse of fish stocks, and degradation of marine habitats. 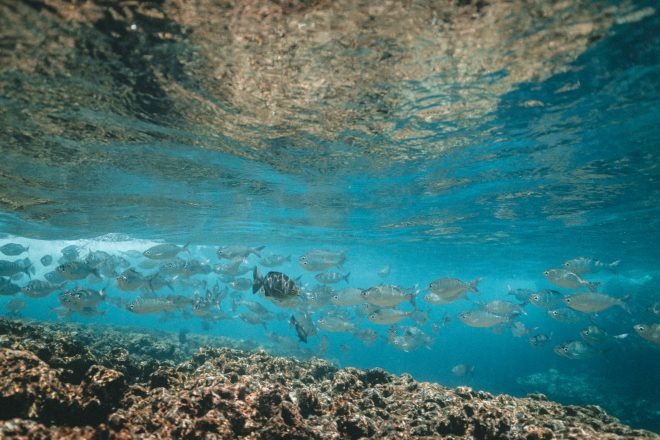 The authors looked at changes in marine species biomass and the effects of human-caused stressors. Photo by Jakob Owens, Unsplash

Biomass (or energy) flows from low to high trophic levels – which characterize the place in the food web – and their changes over time is a key indicator of ecosystem functioning, as they integrate the effects of both natural and human disturbances. In this paper, the authors have tested the hypothesis that anthropogenic ecological impacts may have led to changes in global parameters defining the transfers of biomass within the food web.

The authors showed that changes in species assemblages from anthropogenic activities would induce faster and more efficient biomass transfers in marine food webs, They identified that in some ecosystem these changes led to a global decrease in the biomass flow available for top predators. Further, the main driver of change during that time period was identified to be the large increase in fishing pressure, given that the largest changes occurred in ecosystems where ‘fishing down the marine food web’ were most intensive. These results can be used to assess fisheries management options.

Abstract:
The development of fisheries in the oceans, and other human drivers such as climate warming, have led to changes in species abundance, assemblages, trophic interactions, and ultimately in the functioning of marine food webs. Here, using a trophodynamic approach and global databases of catches and life history traits of marine species, we tested the hypothesis that anthropogenic ecological impacts may have led to changes in the global parameters defining the transfers of biomass within the food web. First, we developed two indicators to assess such changes: the Time Cumulated Indicator (TCI) measuring the residence time of biomass within the food web, and the Efficiency Cumulated Indicator (ECI) quantifying the fraction of secondary production reaching the top of the trophic chain. Then, we assessed, at the large marine ecosystem scale, the worldwide change of these two indicators over the 1950–2010 time-periods. Global trends were identified and cluster analyses were used to characterize the variability of trends between ecosystems. Results showed that the most common pattern over the study period is a global decrease in TCI, while the ECI indicator tends to increase. Thus, changes in species assemblages would induce faster and apparently more efficient biomass transfers in marine food webs. Results also suggested that the main driver of change over that period had been the large increase in fishing pressure. The largest changes occurred in ecosystems where ‘fishing down the marine food web’ are most intensive.