The world is intuitively divided by the existence of recognizable, bounded units of landscape with characteristic climatic regimes and land cover that drives the distribution of existing life on earth. On a global scale, terrestrial ecosystems are grouped into major biomes such as boreal forest, savannah, desert, tundra and grasslands, each with distinct climates, landscapes, species, and vegetation.

The oceans, on the other hand, tell a different story. To the uneducated eye of the non-sailor, the surface of nearly three quarters of the planet is largely homogenous water, with minor differences in surface roughness and color. But are the world’s oceans a biological continuum in which every species could be retrieved everywhere? Or can discrete spatial discontinuities create fluctuations within the distribution of marine species? To answer such a wide topic encompassing many axes and scientific disciplines (ecology, geography, biology or environmental science), marine scientists have adopted a discipline called biogeography. 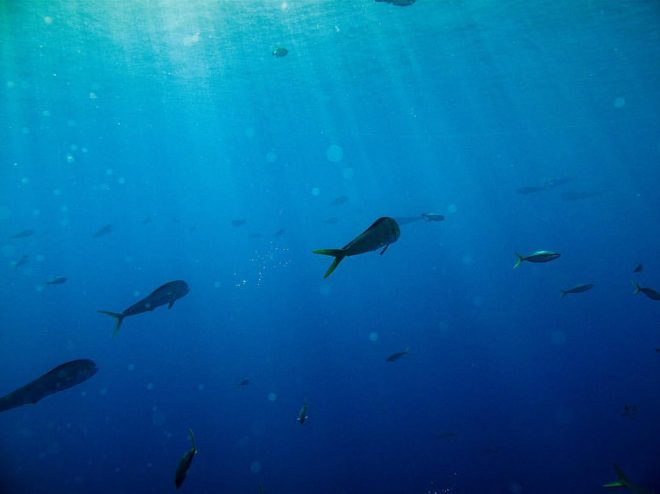 Researchers work to understand spatial distributions of all marine species across the large area that is our oceans. Image: “Open Ocean, Maldives (2009)” by Hani Amir, CC BY-NC-ND 2.0.

A bit of history
Biogeography is the science that attempts to document and understand spatial patterns of species and biological diversity. The evolution of this science could be summarized in four steps. The first attempt could be localised during the XVIIe century in the quote of Buffon, but the discipline really emerged with the scientific exploration mission with Alexander von Humboldt (1769-1859), Aimé Bonpland (1773-1858), Alfred Russel Wallace (1823-1913), Charles Darwin (1809-1882), Sir Julian Huxley (1887-1975), and Philip Lutley Sclater (1829-1913).

A second step was to understand the history of fauna and flora using the evolution concept implemented by Darwin, Wallace and Huxley. It is Ernst Mayr who applied the “historic trait” to biogeography. Within his study, he analysed the origin, differentiation, development, and setting up of the present fauna spatial distribution. The next step may be referred to as the “prediction of spatial distribution”. This period has been marked by the hypothesis that uses fundamental abiotic parameters and the understanding of which process affect life forms; thus, a prediction of the spatial distribution could be completed and then verified in the field. The most remarkable work came from “niche theory” (Hutchinson 1957) and “Theory of Island Biogeography” (MacArthur & Wilson 1963). The last step is experimental biogeography, which tests the hypothesis formulated previously and aims to understand the mechanisms by using artificial ecosystem, creating barriers in known ecosystems, changing the biodiversity of the ecosystem, or changing keystones species.

Today, we can define biogeography as the :
“Study of the spatial distributions of organisms, both past and present, and also understanding of all patterns of geographic variation in nature –from genes to entire communities and ecosystems- elements of biological diversity that vary across geographic gradients including those of area, isolation, latitude, depth, and elevation” (From Brown, 2005)

Biogeography in marine science
Quantifying species’ spatial distributions and hence biodiversity represents one of the fundamental components of ecology. The study of species distribution in relation to both the environment and biotic interactions enables the characterization of ecosystem functioning, and is now used to evaluate the present and future perturbation state, which results from human activities. Unfortunately, the large extent and volume of the water mass of the ocean associated to the relative technological limitation and the consequent need to sample exhaustively the marine realm does not allow us to clearly define the full spatial extent of most marine species.

To tackle this issue, a species distribution model or an environmental niche model was implemented. The methodologies rest on the concept of ecological niche defined by Hutchinson (1957). According to Hutchinson’s theory, “a species can occur in a multimensional environmental interval that has been defined by the evolution shaping their physiological characteristic and competition characteristic to compete for resources” (Figure 1). 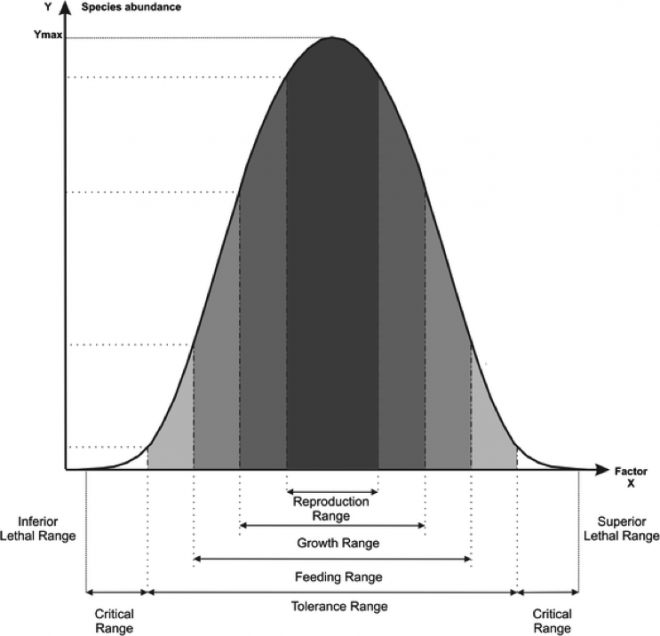 This numerical approach detangles the relation between species observed record and environment, based on the ecological niche theory, to approximate past, present and future distribution of species (Figure 2). These numerical approaches are highly adapted for oceanic communities that are composed mostly by ectotherms; thus, environmental conditions are assumed to drive their spatial distributions. Since most of the data available are occurrence only (i.e online open access database), a presence-only model is usually used. 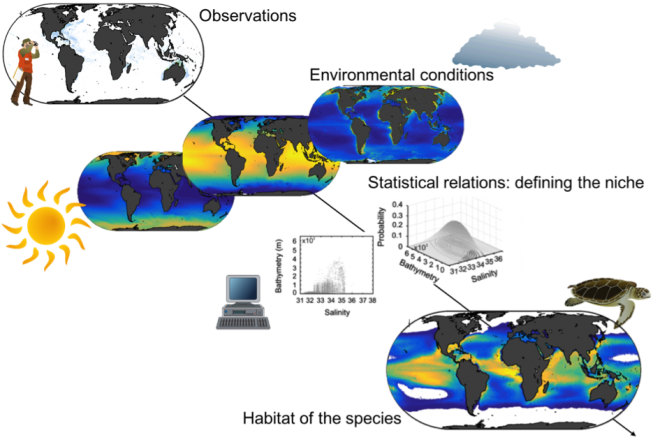 In recent years, this novel numerical approach has been extended within the Nereus Program to examine the present distribution of now more than 40,000 marine species from alga to whale. Additionally, using projections from the Intergovernmental Panel on Climate change, this approach has been used to explore the potential change of distribution due to climate change impacts (Figure 3). Potential changes in distribution for all these species can now be used to evaluate the advantages of an international treaty on climate change (Cheung et al. 2016), the impact on fisheries economics, and the potential implementation of mariculture. 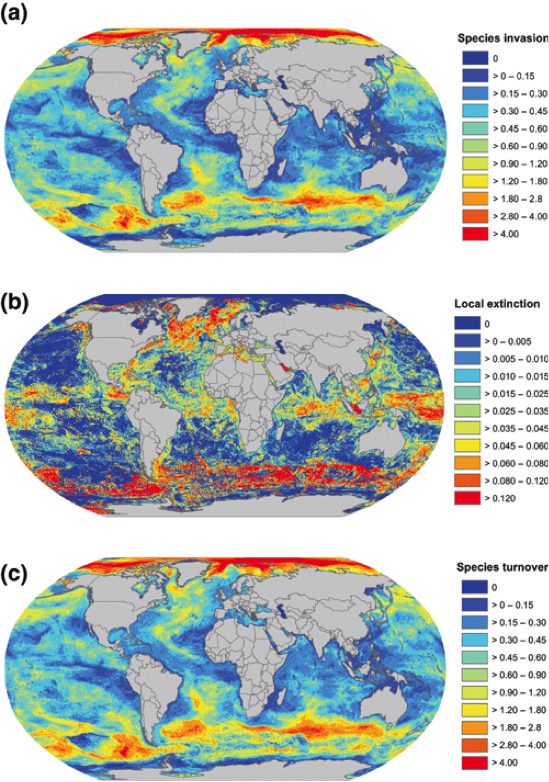 Figure 3.  Predicted distribution of biodiversity impact due to warming‐induced range shifts in marine metazoans. Biodiversity impact is expressed in terms of: (a) invasion intensity; (b) local extinction intensity and (c) species turnover for the 1066 species of fish and invertebrates in 2050 relative to the mean of 2001–2005 (high‐range climate change scenario). Intensity is express as proportional to the initial species richness in each 30′ × 30′ cell. (Cheung et al., 2008) 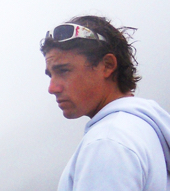 GABRIEL REYGONDEAU, PHD, MACROECOLOGY & OCEANOGRAPHY
UBC
As a member of the Nereus Program, Gabriel Reygondeau’s research focuses on the thematic of “The effects of climate changes and anthropogenic activities on the biogeography of the global ocean”. His current research interests can be summarized in 3 topics: (1) relations between marine organisms (from plankton to top predator), biodiversity and environmental conditions at the global scale; (2) Identification and monitoring of global marine ecosystems and (3) Evaluation of the impact of anthropogenic pressures on the global marine ecosystems.
Comments