Indigenous seafood consumption in The Conversation and Newsweek

“Along the arid coastline of northwestern Mexico, indigenous Seri communities, who first resisted Spanish rule and then Mexican extermination efforts, eventually gained formal titles over a small part of their ancestral coastal and marine territories. The ocean has always sustained their livelihood, but now they must contend with outside competition over declining fish resources,” write Nereus Director of Policy Yoshitaka Ota and Program Manager Andrés Cisneros-Montemayor, in a recent piece on The Conversation.

“This is a familiar story for almost 30 million coastal indigenous peoples around the world from the Arctic to the South Pacific. But until recently no one had ever quantified how intensively they relied on seafood, or its importance for their existence as distinct peoples.”

The article outlines the process of the recent Nereus Program study on Indigenous seafood consumption, as well it looks at the policy implications and the issues of food sovereignty and human security. The article was subsequently published in Newsweek and Salon.

Climate change and fisheries in the Arctic

In the article “Fishing in a Warmer Arctic”, in WWF’s The Circle, Nereus Fellow Vicky Lam writes about these new fisheries and the economic impacts under climate change.

“The rate of warming is faster in the Arctic than the global average and triggers multiple stresses on the Arctic Ocean ecosystem including an increase of invasive species, a rise in ocean acidity and increased human activity brought about by the expansion of commercial fishing fleets as sea ice cover decreases,” writes Lam. “These changes are resulting in fluctuations in the quantity, quality and predictability of catches, all of which have direct implications for the economics of fisheries in the Arctic.” Read more on page 14.

Image from The Circle.

“Sushi as We Know It Will Be Wiped Out by 2050“, published on Vice, looks at how the types of sushi we eat in 2050 will be vastly different if climate change and overfishing is left unchecked.

“After we compiled all the data, the first thing that struck us was that we would be seeing really different fish on a sushi table in a couple of decades time,” said William Cheung, Nereus Director of Science. “Some of the fish that we can easily get in the average sushi restaurant across the street may not be so easy to get in the future, as they become really premium fish.” 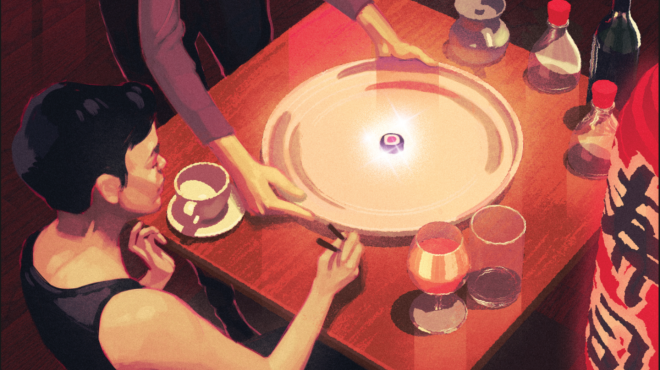