Rebecca Asch knew that climate change was affecting seasonal patterns in the ocean. But she also knew it would be difficult to prove.

After all, it’s more obvious on land.

“In spring you have plants blooming earlier. Animals and birds migrate earlier in the year as temperatures warm,” Asch says. “However, the oceans we know a lot less about, like these changes in seasonal patterns because it’s hard to observe the ocean. So there are a lot of limitations there.”

So how can we know if climate change is influencing the seasons of the ocean?

Asch, a Postdoctoral Research Associate at Princeton University’s Program in Atmospheric and Ocean Sciences and Nereus Program Fellow, is determined to find an answer.

In her research, Asch used global climate models to determine if are changes in the ocean’s seasonal patterns among two distinct groups: phytoplankton and fish.

She presented her analysis at the Third International Symposium on the Effects of Climate Change on the World’s Oceans on March 23 in Santos City, Brazil. Her talk, “Projected mismatches between the phenology of phytoplankton blooms and fish spawning based on the GFDL Earth System Model (ESM2M),” won the award for best early career presentation.

For Asch, the conference was a chance to see how oceanographic research could be integrated into fisheries research.

“It’s quite an interesting group because it’s one of the few conferences where you have people who are physical oceanographers and climatologists come together with people who are studying fisheries management,” she says. “These two types of scientists are basically in different worlds.”

Bridging the gap between these two worlds is vital―especially when it comes to climate change, which affects every aspect of ocean-related research.

Asch’s work is concerned with recruitment, which is basically the number of young fish that come into a population. Recruitment is a key factor in the productivity of a stock because it determines how many fish can be caught in a particular year.

“If you have a lot of young fish coming in, you can fish that stock potentially a little bit more,” Asch says. “[But] if only a few individuals recruit to the adult population then your fishery is going to be more limited.” 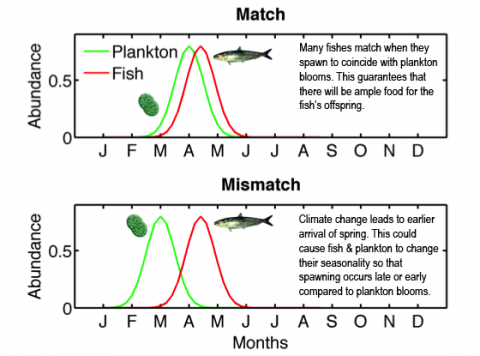 Recruitment all depends on the early stages of life when the fish are larvae. During this period, the larvae are vulnerable to starvation because they haven’t fully developed yet. Their swimming is weak and they’re not good at catching food.

“A lot of fish have tried to game this system by reproducing and putting all of their larvae out into the ocean when you have that seasonal peak in plankton production,” Asch says. “So that way, there will be plankton for the young larval fish to eat. Then their survival will be higher and then you’ll have more recruitment and more adult fish.”

However, with climate change, the fish don’t know exactly when these peaks―known as plankton blooms―are going to happen.

From this observation, Asch’s main question arose: How are the timing of plankton blooms changing and how is the timing of fish spawning changing?

She then wondered if they were changing in the same way and, if not, which areas would most likely affect fisheries.

“What I’ve found is that the fish that are more likely to adapt to climate by changing the location of their spawning grounds are less likely to have mismatches with plankton,” Asch says.

Now, after acclaimed exposure at the conference, she hopes to get key stakeholders talking.

“I’d like to motivate people and [get them] thinking, ‘How does this impact the particular species that I manage and how should we think about this?’ Because at this point, very little oceanographic data is actually integrated in fisheries management.”

And what needs to happen in order for fisheries to coordinate this data? Asch emphasizes two crucial points.

“One, you need a good observation system in the ocean so that data is readily available,” she says. “The other thing is, for management purposes, you really need to see a clear connection between oceanography and how that is going to affect the fishery.”

It may take a while for full integration, but this young researcher is optimistic.

“I think that we’re moving in that direction,” Asch says. “We’re having more and more ecosystem approaches to managing fisheries.”