Tiff-Annie Kenny, Nereus Program Fellow at the University of Ottawa, along with Tad Lemieux, PhD researcher at Carleton University, has published a piece on The Conversation looking at a recent rocket launch that could have negative impacts on Inuit food security, health, and livelihoods. Read an excerpt below:

When the European Space Agency (ESA) launched a satellite into orbit on Oct. 13, it did so despite opposition from Inuit leaders in Canada and Greenland over its potential to contaminate an important Arctic area.

Most, but not all, of the rocket’s highly toxic fuel is burned during the launch. So, when the second stage of the rocket detached and fell back to Earth, it may have contained up to a tonne of unburned hydrazine fuel that was “deliberately deposited” into the North Water Polynya in northern Baffin Bay, between Nunavut and Greenland. 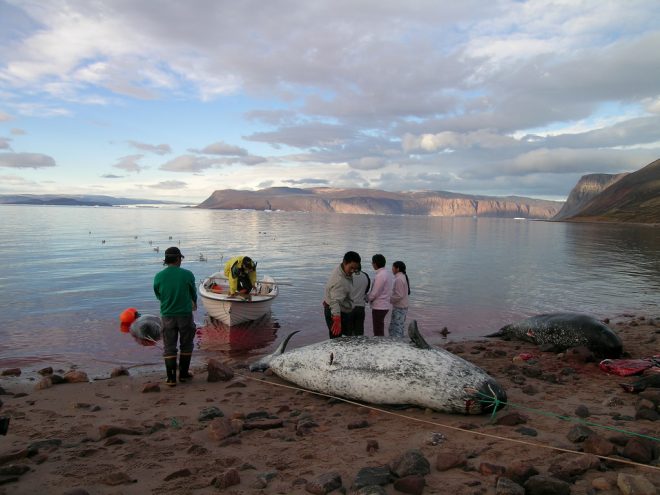 The polynya, or Pikialasorsuaq in Inuktitut, is an area of open water surrounded by sea ice. It is a critical habitat for Arctic species such as narwhal and seals, and is one of the Arctic’s most biologically productive areas. It is also considered to be an important part of the food supply for the Inuit communities who fish and hunt there.

Prior to the launch, the former Prime Minister of Greenland, Kuupik Kleist, called the deposit of potentially dangerous rocket fuel into the Pikialasorsuaq “unacceptable.”

According to a study published earlier this month, at least 10 similar launches have discarded rocket stages in Pikialasorsuaq or in the Barents Sea, off the northern coasts of Norway and Russia, since 2002.

Article 29 of the UN Declaration on the Rights of Indigenous Peoples asserts that states must ensure hazardous materials are not disposed in Indigenous territories without their consent. However, last week’s launch — like the others before it — involved no prior consultation with Inuit.

For Inuit, the rocket launch transcends geopolitics. It strains their ongoing concerns over food safety and food security. It also raises tensions over the rights of Indigenous peoples in contemporary Canada, including their right to food.

CONTINUE READING ON THE CONVERSATION.