Any trip to an aquarium or seafood market reveals the incredible variety of fishes. These fishes not only differ in how they look, but in traits related to life history. Life history traits include maximum body size, longevity, age at maturity, and fecundity – the number of eggs produced. Fishes that have the same phylogeny, or evolutionary history, share similar traits. Conversely, unrelated fishes occasionally evolve similar traits independently. 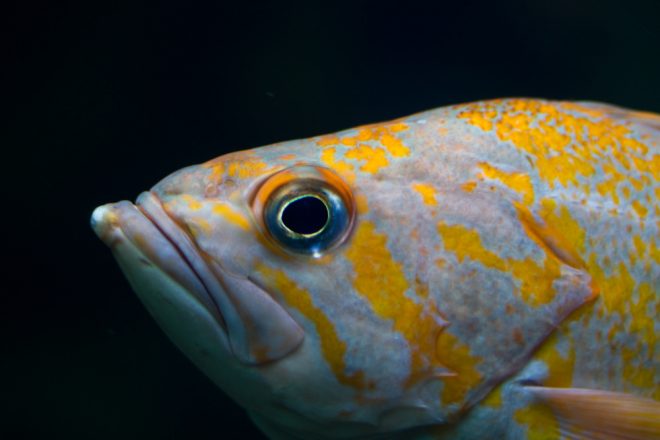 Rockfish, with their high fertility and short gestation periods, appear to be an outlier in the E-P-O framework. Image: “Rockfish” by randychiu, CC BY 2.0.

The E-P-O framework for fisheries management

The environment has shaped the particular life history traits of any given fish. Because life history traits ultimately determine population dynamics, the E-P-O framework developed by Winemiller and Rose (1992) can be used to predict a population’s response to different types of disturbances and as a tool for guiding fisheries management.

Winemiller and Rose evaluated patterns in fish life history traits across species to create an organizing framework. This framework consists of the Equilibrium, Periodic, and Opportunistic (E–P–O) niche scheme, three endpoint strategies of correlated life history traits (Figure 1). Equilibrium species were categorized by moderate to long generation time, low fecundity, and high investment per offspring, such commercial fish species include spiny dogfish and longnose skate. Periodic species were denoted by long generation time, high fecundity, and low investment per offspring – species like Atlantic cod, halibut, and tuna. The Opportunistic strategy consisted of fishes with short generation time, low batch fecundity, and low investment per offspring, such as sardine, anchovy, and mackerel. These endpoints are a trilateral continuum (Figure 2) based on biological constraints (trade-offs) and different fish species could theoretically lie anywhere in this space. 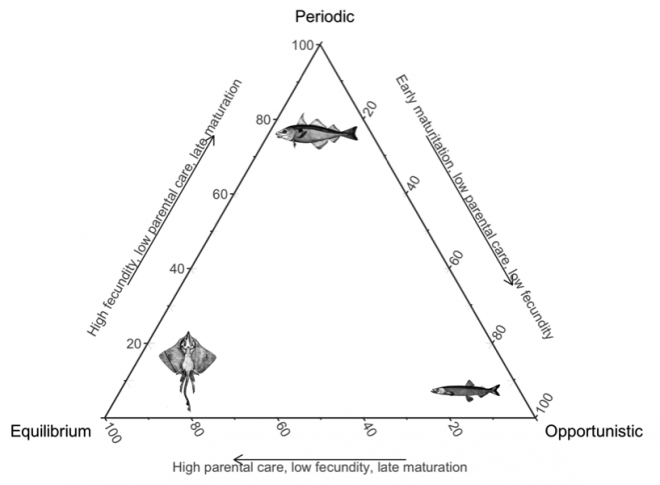 Winemiller and Rose’s analysis consisted of North American freshwater and marine fishes; they noted that marine species tended towards the Periodic endpoint. In this case, it seems unlikely that the small differences in traits could be used for understanding population dynamics. The analysis of Winemiller and Rose was extended globally to include marine species of commercially harvested fish stocks (Secor 1995, Petrik et al. unpublished data). Their results show that when examined alone, marine fish species also encapsulate the triangular continuum, but do not fill the space entirely. 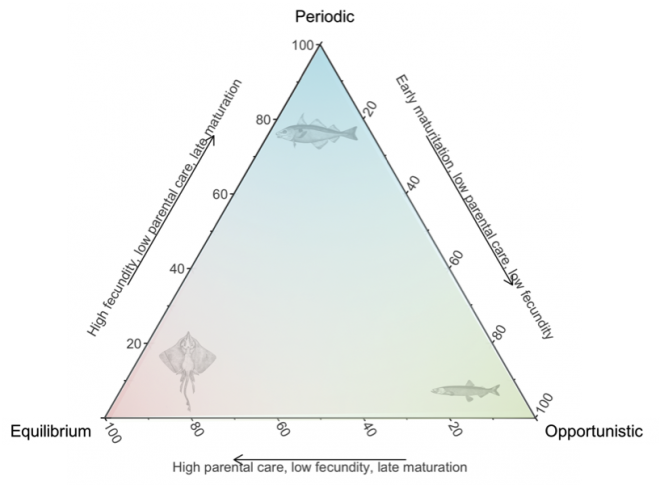 Figure 2. The life history endpoint strategies of Winemiller and Rose (1992) as a triangular continuum of traits.

Analysis of my currently unpublished research led to the emergence of a fourth strategy that lay in between the Periodic and Equilibrium strategies (Figure 3). This type was characterized by its late maturity age and moderate to high parental investment and fecundity, with its high fecundity distinguishing it from Equilibrium species. This category contained many stocks of rockfishes and other deep dwelling species like orange roughy. Winemiller and Rose and Secor also mentioned this intermediate group, but did not consider it as an independent strategy.

This Quasi-Periodic-Equilibrium (Quasi-P-E) group is very interesting from a life history perspective. Here is one example of a life history trade-off that elucidates why. Each female fish has a finite amount of energy for reproduction. If all of this energy is used to create new fish biomass, then, at the extremes, it could be used to make one huge egg or billions of tiny eggs. Larger fish tend to hatch from larger eggs and have a survival advantage. A bigger mouth means that more types of prey fit into it, and a bigger body means that it fits into fewer predators’ mouths. Alternatively, female reproductive energy may be used for other types of survival advantages like physical protection such as building a nest (salmon), creating a case around each egg (skates and rays), or using a placenta to develop offspring internally (sharks). Given these energy constraints, fish reproductive investment tends to be thought of as a spectrum of low investment in numerous offspring to high investment in few offspring. 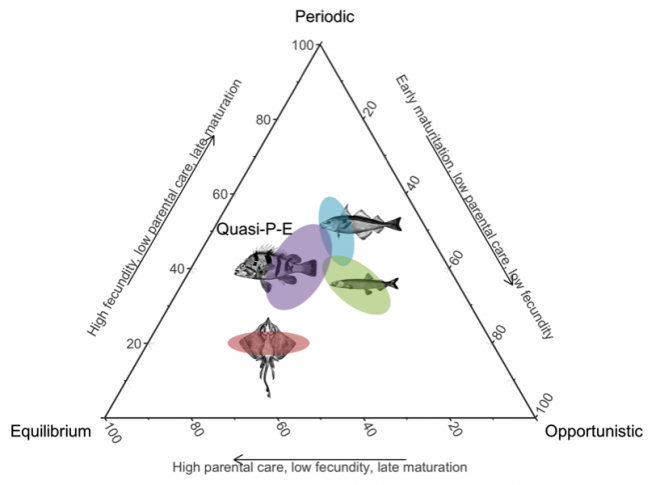 Figure 3. Analysis of Petrik et al. (unpublished data). Colors represent categories of stocks of commercial fish species into one of the life history endpoint strategies. Ovals represent the space filled by different fish stocks each group in the triangular continuum of traits. The Quasi-Periodic-Equilibrium (Quasi-P-E) category is an interesting group composed mainly of rockfishes and is illustrated with the black-banded rockfish.

Why so many eggs?

The Quasi-P-E group appears as an outlier with moderate-high investment in many offspring. Rockfishes in the Sebastidae family truly are highly fecund, but parental investment is not nearly as high as that of a shark even though both groups include live bearers that must provide energy to developing embryos, exchange respiratory gases, and remove waste products. Shark eggs receive all energy from the mother during gestation via specialized structures, such as the placenta. On the other hand, fishes in the Quasi-P-E group have internal eggs that derive all energy either from the egg yolk or from the mother with direct absorption of nutrients from the ovarian fluid rather than specialized structures (Boehlert & Yoklavich 1984, Wourms 1991, MacFarlane & Bowers 1995). Along with lower maternal provisioning, gestation of rockfishes is 1 to 2 months, much shorter than that of sharks, rays, and skates that range from 4 months to 2 years. These disparities sum to large differences in energy investment, but are not quite captured with simple scoring schemes used to create parental care indices.

As internal brooders, the Quasi-P-E group differs from the Periodic fishes. Even though the size at birth of Quasi-P-E offspring is similar to that of newly hatched Periodic offspring, they have more developed eyes, jaws, guts, and fins that allow them to begin feeding immediately (Boehlert & Yoklavich 1984, Wourms 1991). Thus, Quasi-P-E offspring avoid the starvation prone first-feeding stage when larvae switch from yolk resources to preying on plankton. And by being brooded internally they avoid the predation heavy pelagic egg stage. Like the late maturing Equilibrium strategy, Quasi-P-E fishes invest in parental care to increase the probability that offspring survive to reach their late reproductive maturity.

Even though parental investment is lower than that of sharks, skates, and rays, the Quasi-P-E strategy still seems at odds with the life-history trade-off because of their high fecundities. The high numbers of eggs of Periodic fishes are often referred to as a bet-hedging strategy. Periodic females do not provide any care, but by producing so many eggs, there is a good chance that some of them will encounter conditions conducive to survival. If offspring of Quasi-P-E fishes have a survival advantage compared to Periodic fishes, why do they produce so many eggs? Rockfishes and other deep-water fishes in this life history group benefit from bet-hedging as well because they live in habitats with complex substrate (i.e. rocks, reefs, kelp, seamounts, etc.; Love et al. 2002) that have patchy distributions. These patchy habitats require many pelagic larvae either to widely distribute propagules for colonizing patchy habitats (Cowen et al. 2000, 2006) or to retain larvae in episodic oceanographic features (Parrish et al. 1981, Longhurst 2002).

The consequences of this unique Quasi-P-E strategy may be that they are more sensitive to disturbances, like intense fishing, compared to Equilibrium or Periodic fishes. Intense fishing significantly reduces the adult population. Because of the late maturity ages of the Quasi-P-E group, it takes a very long time for the population to rebuild. This is exacerbated by the infrequent success of Quasi-P-E offspring encountering first ideal pelagic ocean conditions for survival until maturity and then ideal bottom habitats for life as adults. Many of the rockfish stocks of the Northeastern Pacific were overexploited in the 1970s (Francis 1986). Fortunately, the U.S. Pacific Fisheries Management Council has recognized the vulnerabilities of these fishes and included their life histories in management strategies, which has resulted in most populations (95%) at healthy levels again. The Pacific Fisheries Management Council is responsible for 100 different species, and there is not data on all of them. Using the life history approach has allowed them to use information from data-rich species and apply it to data-poor species. This is just one example of why life history traits are important and how the E-P-O framework can be used to guide fisheries management.