According to the FAO, anchovy and sardine made up 13% of global catch in 2012. These small fish are consumed by humans, marine mammals, seabirds, squid, and other fish. They are also used for aquaculture feed, industrial oil, and health supplements. “Climate, Anchovy, and Sardine” a new study in the Annual Review of Marine Science, co-authored by Nereus Alumni Rebecca Asch (Princeton University) and Ryan Rykaczewski (University of South Carolina), reviews the past, present, and future of anchovy and sardine.

The first section outlines the evolution and historic populations of anchovy and sardine, it also looks at the similarities and differences in their biologies and migration patterns. The current understandings section reviews how these fish species relate to their environments, including effects of nitrogen supply and upwelling systems, and understandings of current stock fluctuations. 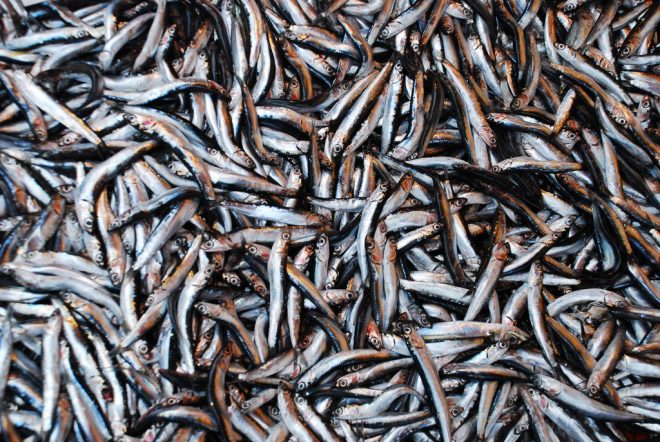 Anchovy and sardine have many traits in common including the capacity for rapid population growth. Image: “Anchovies” by Aaron Brown, CC BY-NC 2.0.

Finally, the paper looks at how climate change may affect anchovy and sardine through ocean warming, acidification, habitat compression, nutrient supply, phenology, and changes in the food web and demands for aquaculture. The paper includes recommended actions for management and policy decisions.

Abstract:
Anchovy and sardine populated productive ocean regions over hundreds of thousands of years under a naturally varying climate, and are now subject to climate change of equal or greater magnitude occurring over decades to centuries. We hypothesize that anchovy and sardine populations are limited in size by the supply of nitrogen from outside their habitats originating from upwelling, mixing, and rivers. Projections of the responses of anchovy and sardine to climate change rely on a range of model types and consideration of the effects of climate on lower trophic levels, the effects of fishing on higher trophic levels, and the traits of these two types of fish. Distribution, phenology, nutrient supply, plankton composition and production, habitat compression, fishing, and acclimation and adaptation may be affected by ocean warming, acidification, deoxygenation, and altered hydrology. Observations of populations and evaluation of model skill are essential to resolve the effects of climate change on these fish. 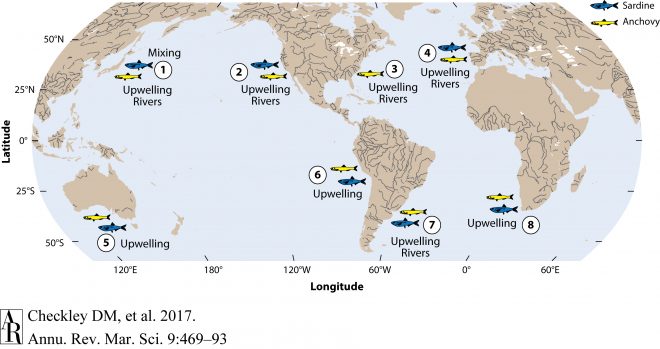