Climate change and human activity have pressing impacts on the state of our ocean, threatening the integrity of marine ecosystems themselves as well as the services they provide to human communities. Given the inevitable current and future effects of climate change, adaptation by both physical and human systems is crucial. As defined by the Intergovernmental Panel on Climate Change (IPCC), adaptation refers to “the process of adjustment to actual or expected climate and its effects.” 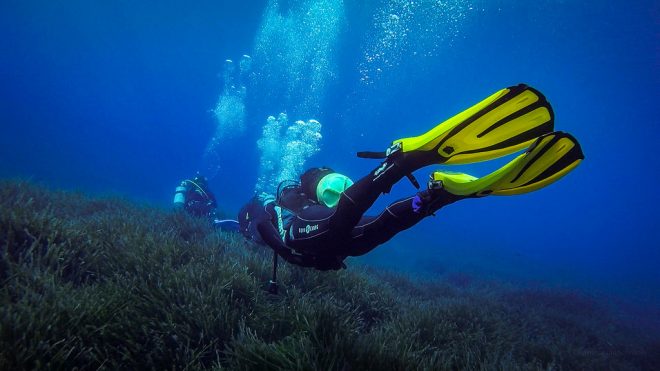 This analysis is intended to provide insight into the current status of both natural adaptations to climate change and ocean acidification in marine systems, and human-assisted adaptation with relevance to livelihoods or industries dependent on living marine resources (i.e., fisheries, aquaculture, and tourism). Image: “Diver” by Jan, CC BY-ND 2.0.

It was found that marine species are adapting to climate change through shifting distributions and timing of biological events. However, natural system adaptation is receiving much more attention in the literature than human system adaptation.

For human systems, the literature review reveals a focus on adaptation planning through proposed frameworks and principles, but there is little data on any implemented adaptation policies and outcomes. Many human system adaptation measures are stuck in the planning process and lack a clear vision for execution due to resource, institutional, and capacity barriers. There is little progress to be seen in terms of human system adaptation responses such as changes in policy, institutions, legal frameworks, or economic incentives.

Abstract:
The world’s oceans are highly impacted by climate change and other human pressures, with significant implications for marine ecosystems and the livelihoods that they support. Adaptation for both natural and human systems is increasingly important as a coping strategy due to the rate and scale of ongoing and potential future change. Here, we conduct a review of literature concerning specific case studies of adaptation in marine systems, and discuss associated characteristics and influencing factors, including drivers, strategy, timeline, costs, and limitations. We found ample evidence in the literature that shows that marine species are adapting to climate change through shifting distributions and timing of biological events, while evidence for adaptation through evolutionary processes is limited. For human systems, existing studies focus on frameworks and principles of adaptation planning, but examples of implemented adaptation actions and evaluation of outcomes are scarce. These findings highlight potentially useful strategies.