Bangladesh is a world leader in aquaculture production, ranking sixth after China, Indonesia, India, Vietnam, and the Philippines. Due to the nation’s favourable physical characteristics, Bangladesh is highly suitable for coastal aquaculture, especially the tiger shrimp sector. Shrimp culture has diversified livelihood opportunities for coastal communities, as over two million people are involved in fish farming, market, processing, and exporting.

A new article “Solutions to blue carbon emissions: Shrimp cultivation, mangrove deforestation and climate change in coastal Bangladesh” has been published in Marine Policy, and is co-authored by Nereus Program Director of Science William Cheung. This article aims to highlight key issues in reducing blue carbon (i.e., carbon in coastal and marine ecosystems) emissions from mangrove deforestation due to shrimp cultivation in coastal Bangladesh, discuss the conversion of mangrove forests into shrimp farms and the impacts of climate change on shrimp culture, mangrove fisheries, and coastal communities, and propose potential adaptation strategies. 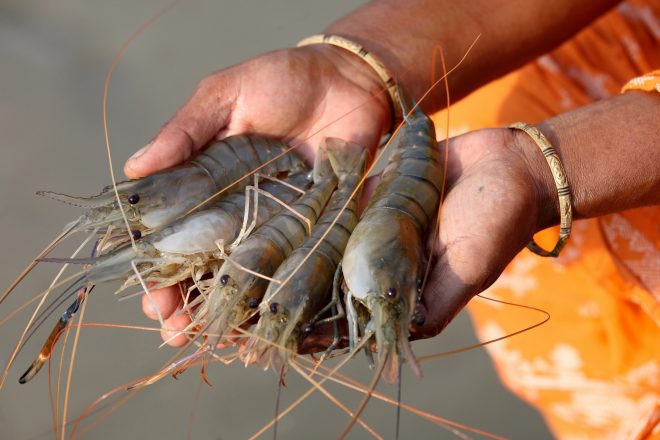 Shrimp farming in Bangladesh has boosted the socio-economic culture of coastal communities across the nation, but at the cost of the integrity of mangrove ecosystems. Image: “Woman showing shrimps caught from her pond in Khulna, Bangladesh” by M. Yousuf Tushar, CC BY-NC-ND 2.0.

The unprecedented growth of shrimp farms has caused widespread destruction of mangrove forests in Bangladesh. Given that mangrove forests are the most carbon-rich forests in the tropics and blue carbon emissions have been largely enhanced due to devastating effects on mangroves, it is crucial to reduce blue carbon emissions from mangrove deforestation in order to tackle anthropogenic climate change. Relocating shrimp cultures from mangroves to open-water Integrated Multi-Trophic Aquaculture (IMTA) combined with the restoration of mangrove habitats could greatly reduce blue carbon emissions. Additionally, Reducing Emissions from Deforestation and forest Degradation (REDD+) could also help reduce blue emissions, while simultaneously building mangrove resilience to climate change. However, institutional and governmental support will be necessary for the implementation of these proposed adaptation strategies. 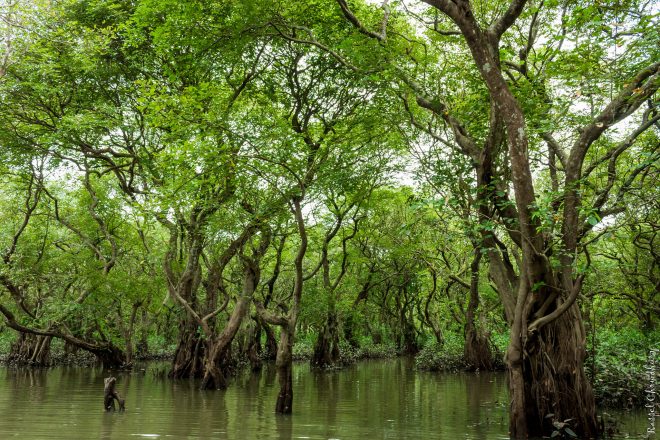 The protection of Bangladesh mangrove forests in order to reduce blue carbon emissions will rely on the implementation of adaptation strategies. Image: “Swamp Forest” by Rassel Chowdhury, CC BY-ND 2.0.

Abstract
In Bangladesh, export-oriented shrimp farming is one of the most important sectors of the national economy. However, shrimp farming in coastal Bangladesh has devastating effects on mangrove forests. Mangroves are the most carbon-rich forests in the tropics, and blue carbon (i.e., carbon in coastal and marine ecosystems) emissions from mangrove deforestation due to shrimp cultivation are accumulating. These anthropogenic carbon emissions are the dominant cause of climate change, which in turn affect shrimp cultivation. Some adaptation strategies including Integrated Multi-Trophic Aquaculture (IMTA), mangrove restoration, and Reducing Emissions from Deforestation and forest Degradation (REDD+) could help to reduce blue carbon emissions. Translocation of shrimp culture from mangroves to open-water IMTA and restoration of habitats could reduce blue carbon emissions, which in turn would increase blue carbon sequestration. Mangrove restoration by the REDD+ program also has the potential to conserve mangroves for resilience to climate change. However, institutional support is needed to implement the proposed adaptation strategies.