“Seasonal phytoplankton blooms in the North Atlantic linked to the overwintering strategies of copepods,” co-authored by Nereus Fellow Rebecca Asch (Princeton University), was recently published in Elementa: Science of the Anthropocene. The paper looks at when and how long phytoplankton blooms occur in the North Atlantic. The authors found a correlation between spring bloom start days and the duration of the bloom, with early blooms lasting longer.

Abstract
The North Atlantic Ocean contains diverse patterns of seasonal phytoplankton blooms with distinct internal dynamics. We analyzed blooms using remotely-sensed chlorophyll a concentration data and change point statistics. The first bloom of the year began during spring at low latitudes and later in summer at higher latitudes. In regions where spring blooms occurred at high frequency (i.e., proportion of years that a bloom was detected), there was a negative correlation between bloom timing and duration, indicating that early blooms last longer. In much of the Northeast Atlantic, bloom development extended over multiple seasons resulting in peak chlorophyll concentrations in summer. Spring bloom start day was found to be positively correlated with a spring phenology index and showed both positive and negative correlations to sea surface temperature and the North Atlantic Oscillation in different regions. Based on the characteristics of spring and summer blooms, the North Atlantic can be classified into two regions: a seasonal bloom region, with a well-defined bloom limited to a single season; and a multi-seasonal bloom region, with blooms extending over multiple seasons. These regions differed in the correlation between bloom start and duration with only the seasonal bloom region showing a significant, negative correlation. We tested the hypothesis that the near-surface springtime distribution of copepods that undergo diapause (Calanus finmarchicus, C. helgolandicus, C. glacialis, and C. hyperboreus) may contribute to the contrast in bloom development between the two regions. Peak near-surface spring abundance of the late stages of these Calanoid copepods was generally associated with areas having a well-defined seasonal bloom, implying a link between bloom shape and their abundance. We suggest that either grazing is a factor in shaping the seasonal bloom or bloom shape determines whether a habitat is conducive to diapause, while recognizing that both factors can re-enforce each other. 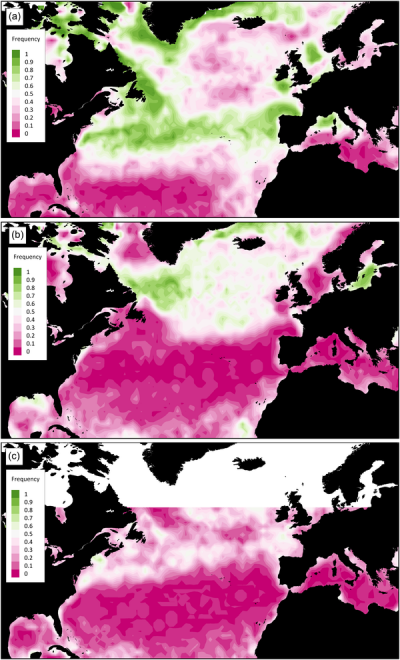 Figure 2. North Atlantic bloom frequency. Spring (a), summer (b), and fall (c) bloom frequencies defined as the ratio of years with blooms divided by the total number of years over the period 1998–2014.