Developing scenarios — projections of the future — may help individuals, communities, corporations, and nations develop a capacity for dealing with the future. Scenarios are an important tool for proactively thinking about, and acting in a way that anticipates, things to come.

Science fiction prototyping, developed by Brian David Johnson, refers to “short works of fiction, grounded in scientific fact and crafted for the purpose of starting a conversation about the implications, effects, or ramifications of technology and the future.” This method provides a focused and creative way to think about possible futures around a specific issue.

“Fish Inc” by Simon Stålenhag, based on scenario two. Click to expand. 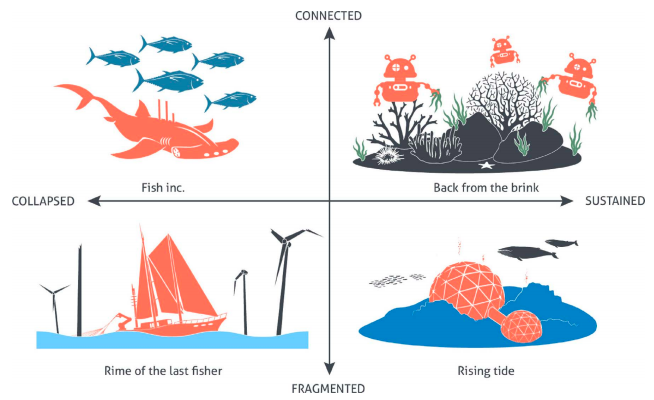 The continuum of the four future ocean scenarios based on ecological (x-axis) and social (y-axis) contributions. Image: Figure 2 from Merrie, Keys, Metian, & Österblom, 2017.

As suggested by the four ocean futures, the ocean matters and the future of humanity is closely tied to our treatment of the ocean. It then becomes apparent that long-term allocation of financial resources could generate capacity to invest in global rebuilding efforts for marine ecosystems. Ultimately, this approach may make scenarios more accessible and understandable to non-academics. Further, this research may inform developing proactive governance mechanisms.