On April 3rd, 2018, tribal representatives, students and academics gathered to discuss a pressing issue for coastal indigenous communities of the Pacific Northwest: the future of the fish they’ve relied on since time immemorial. Climate change, pollution and toxic algae blooms are threatening the survival of salmon and shellfisheries relied upon by both the Native American tribes in Washington State and First Nations in British Columbia. These fisheries represent significant nutritional and economic value to both peoples, and they also have deep running cultural importance. All three aspects were considered during the gathering entitled Fish and Future held at the University of Washington’s wǝɫǝbʔaltxʷ (“Intellectual House” in the Luhshootseed language). The building was inspired by the traditional Long Houses of the Coastal Salish people, with lofty cedar walls and beams overlaid with indigenous artwork. Traditional song and drumming filled the space as Willard Bill Jr, Cultural Director of the Muckleshoot Tribe and his son, Justice Bill, delivered a welcome prayer to commence the meeting. The words, music and setting created an unrivaled sense of place and purpose. “We are here,” Bill told us, referring to the Indigenous People of the Pacific Northwest. “We are alive and strong. We are from here – we’ve never been from anywhere else.” 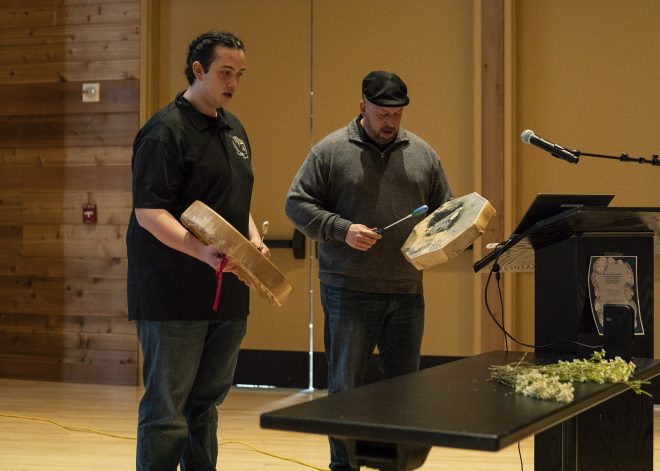 The environmental threats to the fisheries relied upon by 37 million coastal indigenous populations are born from the actions of developed nations, making food sovereignty for these groups a pressing issue of global equity. “Forty-one percent of First Nations people in BC experience food insecurity,” explained Dr. Laurie Chan. “Ninety-one percent of people surveyed want to eat more traditional food but simply don’t have access to it any longer. This is an issue for a number of reasons; one being because diets are healthier when more traditional food is eaten than market food.” And conditions are likely to get worse, Chan explained. “Under the influence of climate change, projections show a considerable decline of fish stocks along the coast of British Colombia. This could result in a decrease of healthy food and essential nutrient intake and also has a negative impact on the well being of the people’s culture.” In other words, this isn’t just a loss of nutrients; it’s a loss of heritage. 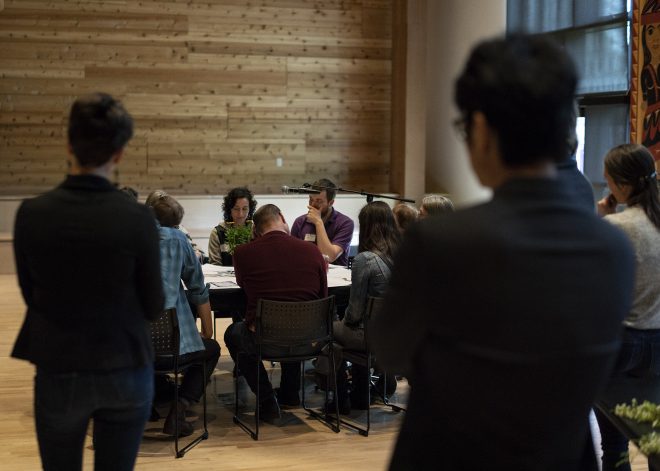 The format of the gathering was innovated to inspire and generate creative thinking about what needs to be done. Academic talks and presentations were interspersed with a film screening of Colby K. Neal’s Broken Fish and an interactive reading from The Last Best Place, a play about salmon, people, and habitat by Dr. Sara Jo Breslow. Breslow’s play arranges the words of tribal members, farmers and scientists taken down during anthropological interviews to tell the story of the human-salmon ecosystem in the Pacific Northwest. She gathered eleven members of the audience around a table and handed them each a script. “But there are days when I wonder, if all what they really want, is control over what you do? Or do they really want to save fish?…And you know, you might not understand this, but my family’s been here for 110 years. That’s a long time. This land is my heritage and I intend to pass it on to my grandchildren,” read one participant, speaking the words of a farmer frustrated by restoration regulations. “It staggers me that someone could say that to, say, members of an Indian tribe,” replied another participant, speaking the words of a tribal staff person. “That, you know, to – to whom one hundred and ten years is not even a blink of an eye.” Participants were able to experience the perspective of the character they played, regardless of how different it was from their own, and speak the words of another human with feeling and empathy. 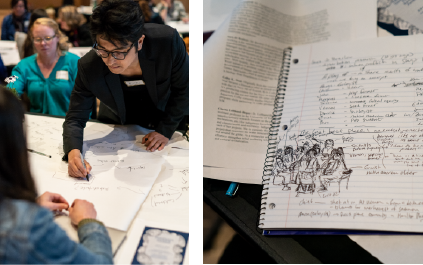 The morning’s proceedings inspired a generative planning session in the afternoon. Participants proposed creating a task force to align ongoing efforts, and to integrate Indigenous and western-based sciences to develop strategic adaptation and action plans. “When we take inquiry back to the tribal community, we get history, community and culture along with the research objective,” said Swinomish tribal elder Larry Campbell. The meeting ended on a note of progress and excitement about new plans and initiatives inspired by the day’s dialogue. “All of the organizations here presumably started with a first meeting,” said Dr. Elaine Faustman. “I know this meeting will be the start of something new for many of you.”