Not all fish swim the same way. Some fish will live their whole lives swimming around a tiny home range, while others migrate 5000 km across the Atlantic ocean in just a few months. Even among those that move over large areas, there is a lot of variability.

“Some fish have specific migratory routes, like bluefin tuna — they are most definitely going from point a to point b. They have life stages on either side, breeding in one place and feeding in the other,” says Daniel Dunn, Nereus Program Principal Investigator at Duke University. “Other fish like yellowfin tuna don’t have specific routes — they move and breed across the whole tropical ocean.” 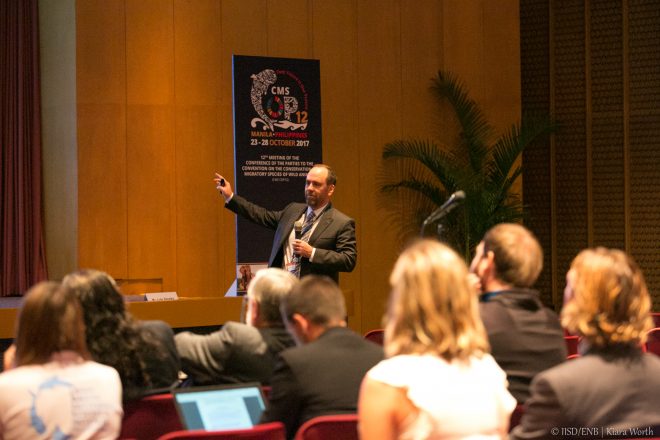 Dunn is leading a new project with Patrick Halpin, Duke University, that is meant to fill a huge gap in marine spatial planning. It will bring together data on migration and connectivity of more than 1000 marine species — including fish, sea turtles, marine mammals, and seabirds. He recently presented the new system at a side event of the twelfth session of the Conference of the Parties to the Convention on Migratory Species (COP 12).

The Marine Geospatial Ecology Lab of Duke University is currently leading a consortium of partners to develop a system to describe Migratory Connectivity in the Ocean (MiCO). It will be the first such system for ocean migrations. Learn more about the system’s development on Fellow Guillermo Ortuño Crespo’s blog post.

The CMS CoP meets every three years, so it was a “good opportunity to work with stakeholders early on, present initial results and encourage feedback,” says Dunn. Dunn and Ortuño Crespo are also involved in informing negotiations over a new treaty for the conservation and sustainable use of biodiversity beyond areas of national jurisdiction (i.e., in the high seas) in preparatory stages at the UN.

“We know a lot about life cycle stages like breeding and foraging. Those tend to occur, for a vast majority of species, within national jurisdictions,” says Dunn. “But they’re going through the high seas to get from one place to the other. That is a real problem as the open ocean becomes a big data black box. It leads to huge gaps in the knowledge underpinning marine spatial planning.” 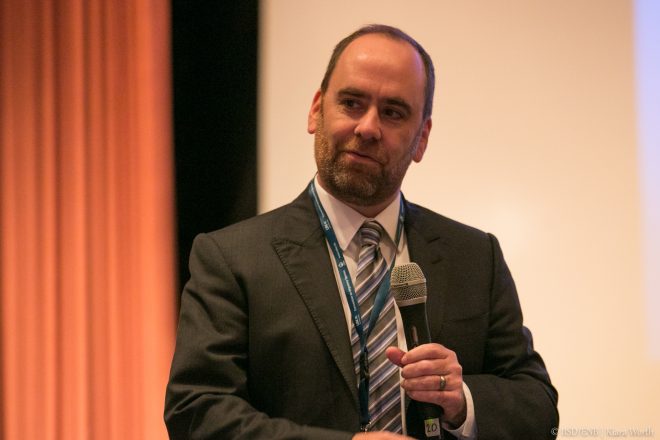 Photo by IISD/ENB | Kiara Worth.

Dunn says that just having distribution data on these species is not enough. They will also be developing a network model to see how the ocean is connected by these species — “so you can pull a string on one ocean of the ocean and see something happen on the other side of the ocean.” He gives an example of seabirds nesting in one place and foraging in another, which could be thousands of kilometers away.

“If you release rats on an island in the middle of the Indian Ocean and they destroy the breeding colony, that’s going to have an impact on the ecosystem where they forage in, say, Australia or Chile,” says Dunn. “It’s on the other side of the planet but still connected to that place and the impacts will be felt in both places.”

Dunn mentions that there was positive feedback and a lot of interest in the Convention on the Conservation of Migratory Species having a role in high seas management and the BBNJ process. The event was successful in reaching out to stakeholders and their institutes and getting discussions started.