Coastal Indigenous people eat, on average, 15 times more seafood per person than non-Indigenous people in the same country, finds a Nippon Foundation-Nereus Program study published today in PLOS ONE. This highlights the need to consider food sovereignty and cultural identity as part of fisheries policy and Indigenous human rights.

“Having access to a global database that quantifies fish consumption specifically by Coastal Indigenous peoples is a critical contribution to Indigenous struggle on a number of fronts,” says Sherry Pictou, former Chief of L’sɨtkuk (Bear River First Nation) and member of the World Forum of Fisher Peoples Coordinating Committee. “Most significantly, the generation of information about the consumption of fish as food marks the critical issue of Indigenous food sovereignty.”

The first global-scale analysis of its kind, the authors estimate that coastal Indigenous people consume 74 kg of seafood per capita, whereas the global average is 19 kg. The communities studied include recognized Indigenous groups, self-identified minority groups, and Small Island Developing States. These groups all share similar histories of marginalization and deep social and cultural connections to marine environments. 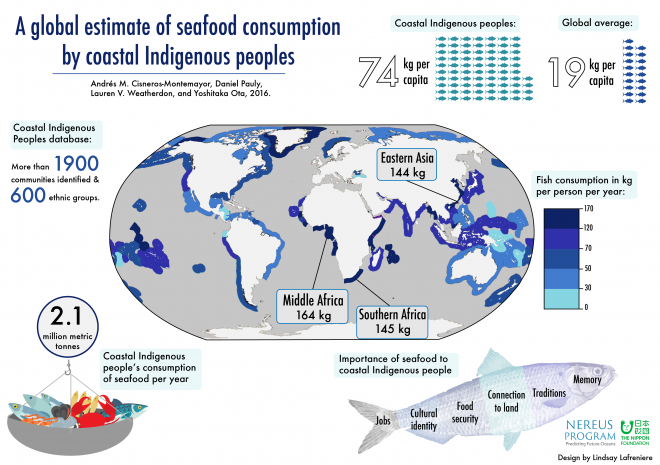 “The importance of the ocean for coastal Indigenous peoples goes way beyond seafood consumption, even though it’s often the main part of their diets,” says co-author Yoshitaka Ota, Nippon Foundation-Nereus Program Director of Policy. “For a lot of these communities, the practice of fishing forms a link to their culture that defines them as a people. It’s not just about eating fish, it’s about maintaining an identity as a distinct culture.”

The authors collected observed data and worked with local researchers to build a database of more than 1900 communities who altogether consume 2.1 million metric tonnes of seafood per year.

“This is the first time that Indigenous issues have been viewed in this global light in a quantitative way. If Indigenous people are not nationally recognized, they do not exist at the state level,” says lead author Andrés Cisneros-Montemayor, Nippon Foundation-Nereus Program Manager and Research Associate. “A global database shows the scale and the significance, which is extremely important to amplify their voices. It puts the people on the map.” 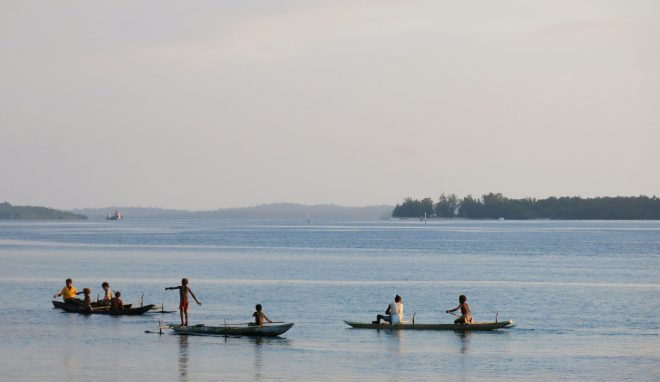 Mothers and children handlining for fish in the evening in Kavieng, Papua New Guinea. Image by Colette Wabnitz.

The ocean provides a vital source of food and economic security for these communities, while also shaping their cultural heritage and spiritual values for millennia. The study’s estimates are the base requirements for seafood, as only consumption was included and not employment and economic needs. Due to this reliance on ocean resources, climate and ecosystem changes are increasing the vulnerability of coastal Indigenous peoples.

The authors urge that not only must fish and ecosystems be protected, but also those lives and culture that depend on the ocean.

“Our goal is to provide data and analytical skills but support the community-level initiatives. We looked at this from a global perspective but we don’t advocate for top-down solutions,” says Cisneros-Montemayor. “Solutions have to come from the communities, they can lean on international laws and policy, but it has to be in a way that is appropriate to their needs and their context.”

The study “A global estimate of seafood consumption by coastal Indigenous peoples” was published in PLOS ONE, additional authors include Daniel Pauly, chair of the Nereus Steering Committee, and Lauren Weatherdon, Nereus collaborator. Article link: http://dx.plos.org/10.1371/journal.pone.0166681.

About the Nippon Foundation-Nereus Program
The Nereus Program, a collaboration between the Nippon Foundation and the University of British Columbia Institute for the Oceans and Fisheries, has engaged in innovative, interdisciplinary ocean research since its inception in 2011. The program is currently a global partnership of six leading marine science institutes with the aim of undertaking research that advances our comprehensive understandings of the global ocean systems across the natural and social sciences, from oceanography and marine ecology to fisheries economics and impacts on coastal communities. Visit nereusprogram.org for more information.