By Hannah R. Bassett, School of Marine and Environmental Affairs, University of Washington

Controlled chaos is one way to describe a Surya Vanka-led Design Swarm. Controlled chaos that brings great minds together to solve important real world problems would be more accurate. Conceived of by Vanka, a design industry leader and former Director of User Experience at Microsoft, the innovative hack-a-thon meets brainstorm design approach has been traveling the globe tackling issues where solutions are in high demand.

This past January, Vanka and his traveling design-catalyst system partnered with University of Washington graduate students in the Communication Leadership Program to tackle the elusive issue of climate change impacts on the ocean and the people who rely on it for jobs, food, culture, and life itself – namely, everyone in the world. Lead by Professor and Assistant Director Scott Macklin, with the assistance of Director Hanson Hosein, 60 up-and-coming leaders in communication and design went from having potentially never considered this globally-relevant topic to hatching 500 ideas for addressing it. All in one day. 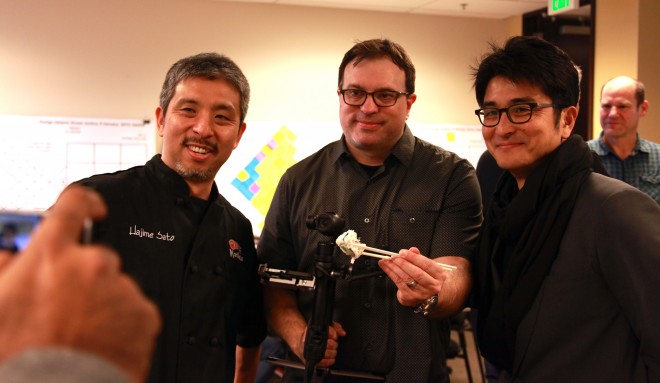 Isn’t 500 ideas a bit excessive you might ask? Well no, Vanka would say. “Being critical is easy, being creative is much harder,” Vanka told the students, “We are not trying to create Mona Lisas, we are trying to solve problems”. Coming up with a huge number of ideas in a short amount of time, required that the students let go of any reservations they might have about sharing ideas and simply allow the creativity to flow.

That is why after hearing from 4 different experts on the topic, the students were given only 20 minutes for each group to come up with 50 novel ideas. In this initial “sprint” the designers didn’t have time to discuss or consider logic or feasibility – their only job was to let go of judgement and criticism and throw their ideas out into the world and on to a post-it note. Students were encouraged to draw their ideas to really capture their essence.

Given the complex nature and very real implications of ocean climate change, this was not a small challenge. In keeping with the rapid pace of the swarm, invited experts summed up one aspect of the problem in a cool ten minutes (or 13 when they just couldn’t emphasize the importance of their point strongly enough). Yoshitaka Ota, Nereus Program Director, Policy, set the stage, introducing students to what their sushi menus will look like in 20 years if climate change is not curbed. Edward Allison, Professor of Marine and Environmental Affairs at the University of Washington, followed, drawing attention to the lack of awareness of climate change effects on the ocean as compared to effects experienced on land. Deric Gruen, of the Coalition of Communities of Color for Climate Justice, solidified the connection to humans, noting that people with less access to resources are at greater risk to the effects of climate change; the disparity of the climate change burden is already evident in our own backyard. Rounding out the expert session, Jerry Millhon, of the Thriving Communities Initiative, and Annie Crawley, underwater photographer and filmmaker, challenged students to communicate creatively in a way that both informs and inspires. Among the audience was Nelson Del Rio, CEO of Prosperity of the Commons International and a panelist on the World Bank’s Global Partnership for Oceans, who advised students from a policy and business perspective. 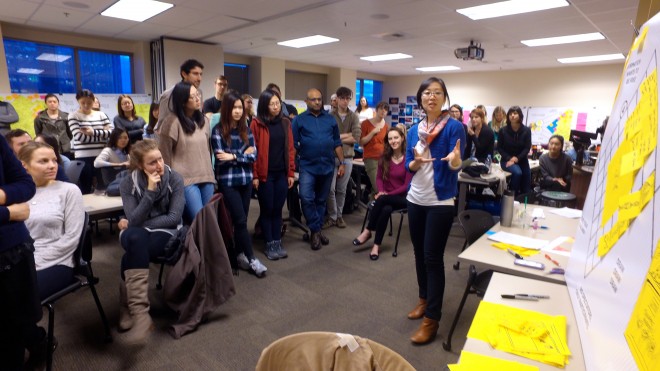 Vanka’s decades of pioneering design was evident as he guided the students through an unfamiliar and at times uncomfortable process to take on this large problem in a short amount of time. To the chagrin of many students, after the rapid and demanding brainstorm sprint, the next step was to allow other groups to “steal” their ideas. So for another 10 minutes, students walked around the room, learning about the ideas of their classmates and letting go of their own.

If this Design Swarm sounds like it was moving fast, it is because it was. Aside from lunch provided by Hajime Sato, owner of Seattle’s only sustainable seafood sushi restaurant, Mashiko, there were no scheduled breaks. Groups had to self-organize the all-important coffee runs or brief breaks to regain mental acuity. But this is what controlled chaos is all about. By the end of the action-packed day, each team had one “low-fidelity” design concept with game-changing potential.

Researchers, managers, development professionals and others dedicate their lives to learning about and coming up with solutions to some of the world’s biggest challenges. But, without action of the masses, lessons will go unlearned and solutions will go unseen.

Over the next three months, the UW Communication Leadership students will hone their Design Swarm concepts into high-fidelity plans for inspiring people to be part of the solution to climate change in the oceans. Together, with innovators like Surya Vanka and experts like Ota, Allison, Gruen, Millhon, Sato and Crawley, these budding designers will bring change through uninhibited, unbridled and rapid innovation.

We all have defenses up when it comes to sharing ideas – we need to let go of our inhibitions, so that we can come up with truly innovative ideas.

HANNAH R. BASSETT, RESEARCH ASSISTANT, SCHOOL OF MARINE AND ENVIRONMENTAL AFFAIRS, UNIVERSITY OF WASHINGTON
Hannah Bassett is a Graduate Student at the School of Marine and Environmental Affairs, pursuing her Master’s degree in interdisciplinary studies of coupled marine human-natural systems with an emphasis on small-scale fisheries dynamics. Hannah has previously published work from her research in the field of marine mammal acoustics in addition to co-authoring a review on climate change, humans, and oceans with Professor Allison in a recent special issue of Science. Hannah has previously done survey-based field work assessing the status of small-scale fisheries in American Samoa and was a coordinator of the Small-scale and Artisanal Fisheries Research Network based out of Scripps Institution of Oceanography. Her current interests lie in the intersection of human and environmental health, quantitative approaches to social-ecological problems and the role of human rights in resource management research, decision-making and policy.