A meadow under the sea? Not to be confused with seaweeds, seagrasses are land plants that have adapted to living their entire lives submerged in saltwater. They are close relatives of terrestrial grasses, seagrasses are thought to have colonized marine environments several millions of years ago. Different species of seagrass are found in tropic and temperate regions around the world from Southeast Asia to Scandinavia and all around North America. They are known as a “foundation species” because they create important habitat for a wide array of other organisms. Like coral reefs and kelp forests, seagrass meadows are considered to be a globally important ecosystem-type; they are highly productive, prevent shorelines from erosion by stabilizing sediment, and provide permanent and migratory habitat for a rich diversity of species on the same order of magnitude as some coral reefs. 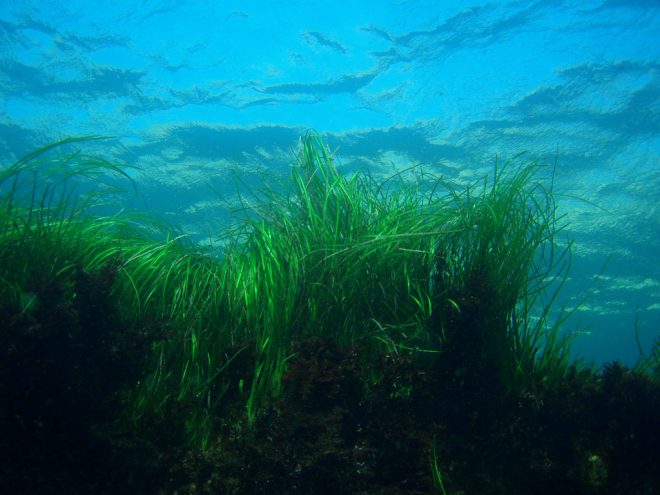 Another frequently cited reason for the importance of seagrass meadows to global oceans is that they provide nursery habitat for juveniles of commercially important fish species like herring, cod, and salmon, to name a few. The young fish take advantage of the shelter from predators that the seagrass provides. They also feed and gain lots of weight in the meadows because of the high productivity that these rich ecosystems generate — seagrass meadows produce more biomass in a given area than do phytoplankton in pelagic waters.

Seagrasses also provide more nutritious food sources than other ecosystem types. Stable isotope analysis studies have found that major fisheries species living in seagrass beds derived their biomass from more carbon-rich sources than their counterparts in sites far away from seagrass beds where carbon was derived from depleted sources such as mangroves and terrestrial detritus — dead, organic matter. The biomass that juvenile fish accumulate within seagrass meadows eventually leaves and is transported to the open ocean when the fish are large enough to swim towards pelagic waters. This phenomenon of one ecosystem contributing biomass to another is known as “trophic transfer”. 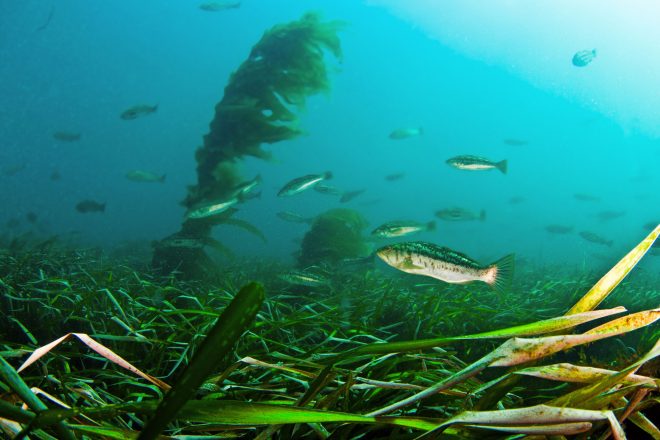 Seagrass meadows are declining globally at an alarming rate, and studies have demonstrated that the degradation of seagrass habitat by boat traffic, trawling, and pollution can have a negative impact on important fish stocks due to habitat and food web disruption.

Nereus Director of Policy Yoshitaka Ota published a chapter describing a seagrass case study in a 2011 CBD report on biological and cultural diversity in the Japanese Archipelago. The case study describes a small-scale fishing community by the Seto Inland Sea, Hinase, that restored disturbed seagrass habitat to improve the health of their local fishery. Seagrass habitat around Hinase had been previously destroyed by industrialization between the 1950s and 1980s, resulting in noticeably depleted fish stocks. To revive stocks, they artificially re-introduced cultivated juveniles to the ecosystem, however the stocks did not improve. They recognized that the problem came from seagrass habitat degradation, and figured the best way to restore their fishery was to restore the health of the whole ecosystem that their target fish stock relied on. The local community, government, and scientists combined traditional and scientific knowledge to carefully re-plant the seagrass Zostera marina in a way that would benefit young fish. Thus far they have restored the cover of the seagrass bed from 12ha in 1985 to approximately 100ha and appreciate not only a slowly returning sustainable fishery, but also the inherent benefits of having a rich diversity of marine life.

Coral reefs have thus far received a lot more hype than seagrass meadows as biodiversity hot spots. However research has recommended increasing the inclusion of seagrass ecosystems in Marine Protected Area planning because of the wealth of social and economic benefits they can bring to coastal communities. Both ecosystem types are highly vulnerable to climate change and physical anthropogenic fragmentation; the biodiversity that they support (with important fish at the top of these food webs) could dramatically suffer without appropriate conservation efforts. A first step is to increase public recognition of their critical importance.