When most of us think about the list of impacts of climate change on our oceans, rising sea levels, warming waters, and ocean acidification are at the top. Nereus Director of Science William Cheung (UBC) and OceanCanada Director and Nereus Research Associate (Honourary) Rashid Sumaila (UBC) recently co-authored a review paper in Global Change Biology that explored an unexpected but important climate change-related stressor in our oceans: marine contaminants.

The paper proposes that climate change will alter the effects of pollutants in marine food webs by either directly increasing contaminant exposure (for instance due to receding ice caps), or making organisms more vulnerable to other climate change impacts. It discusses two main classes of contaminants that can affect the health of marine organisms: fat-soluble contaminants known as persistent organic pollutants (POPs), and protein-binding contaminants such as methylmercury (MeHg). Though several of these contaminants were phased out in the 1970s, they continue to be cycled through marine food webs, and according to the authors have the most significant impacts on marine biodiversity. 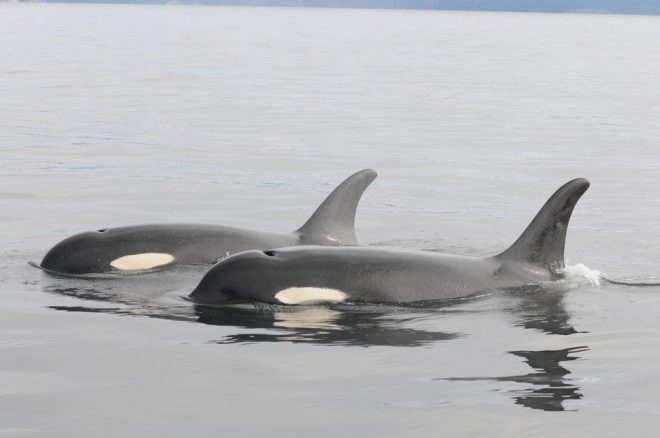 The authors present a case study exploring the interactive effects of climate change and contaminants on killer whale food webs in the Northeastern Pacific. Killer whales are among the most PCB-contaminated animals in the world. Image: “Orca Pod Southern Residents” by NOAA.

The authors present a review of existing literature on the interactive effects of climate change and contaminants. Based on their findings, they presented a case study from the Northeast Pacific, where they predicted several possible effects of climate change and contaminants on killer whale food webs. For example, increased ocean temperatures might reduce the fat content and size of Chinook salmon (the primary food of resident killer whales) and increase polychlorinated biphenyls (PCBs), a common persistent organic pollutant, in their tissues. As a result, killer whales may need to eat more Chinook salmon to compensate for the lower fish fat content, and would therefore bioaccumulate more PCBs in their own tissues than in a “business as usual” or no climate change scenario. PCBs and methylmercury also depress the immune systems of marine organisms, which would make them more vulnerable to new diseases and pathogens that might be brought into their habitat due to changing climate and ocean temperatures.

They conclude by noting the implications on fisheries in terms of stock abundance and food safety, and present their methods as a framework that should be used to further investigate the under-researched effects of climate change and contaminant effects on ocean ecosystems.

Climate change is reshaping the way in which contaminants move through the global environment, in large part by changing the chemistry of the oceans and affecting the physiology, health and feeding ecology of marine biota. Climate change-associated impacts on structure and function of marine food webs, with consequent changes in contaminant transport, fate and effects, is likely to have significant repercussions to those human populations that rely on fisheries resources for food, recreation or culture. Published studies on climate change-contaminant interactions with a focus on food web bioaccumulation were systematically reviewed to explore how climate change and ocean acidification may impact contaminant levels in marine food webs. We propose here a conceptual framework to illustrate the impacts of climate change on contaminant accumulation in marine food webs, as well as the downstream consequences for ecosystem goods and services. The potential impacts on social and economic security for coastal communities that depend on fisheries for food are discussed. Climate change-contaminant interactions may alter the bioaccumulation of two priority contaminant classes: the fat-soluble persistent organic pollutants (POPs), such as polychlorinated biphenyls (PCBs), as well as the protein-binding methylmercury (MeHg). These interactions include phenomena deemed to be either climate change-dominant (i.e. climate change leads to an increase in contaminant exposure) or contaminant-dominant (i.e. contamination leads to an increase in climate change susceptibility). We illustrate the pathways of climate change-contaminant interactions using case studies in the Northeastern Pacific Ocean. The important role of ecological and food web modelling to inform decision making in managing ecological and human health risks of chemical pollutants contamination under climate change is also highlighted. Finally, we identify the need to develop integrated policies that manage the ecological and socio-economic risk of greenhouse gases and marine pollutants.