A new paper led by Nereus Program Fellows Robert Blasiak and Jessica Spijkers and co-authored by Nereus Principal Investigator Henrik Österblom published in PLoS ONE reveals that least developed countries and Small Island Developing States (SIDs) are among the most vulnerable to climate change impacts on fisheries, under an analysis of a vulnerability index of 147 countries.

The research found per capita emissions and vulnerability to be negatively correlated, indicating that there is an increasing urgency to reduce inequalities, promote human well-being, and ensure sustainable development across states of varying levels of development in the context of marine management. To attack this issue, we must pursue commitments to enhance the adaptive capacity of vulnerable nations by effectively allocating climate finance to enable the transfer of marine technologies towards high-risk states. 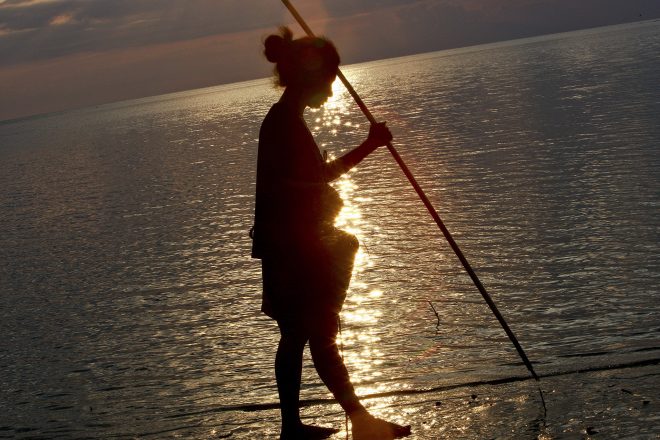 Developing nations, which have contributed little to the issue of climate change, are likely to experience reduced livelihood opportunities and emerging dietary nutrient deficiencies as a result of climate change impacts on fisheries. Image: “Woman Collecting Fish at Sunset” by United Nations Photo.

Abstract
Future impacts of climate change on marine fisheries have the potential to negatively influence a wide range of socio-economic factors, including food security, livelihoods and public health, and even to reshape development trajectories and spark transboundary conflict. Yet there is considerable variability in the vulnerability of countries around the world to these effects. We calculate a vulnerability index of 147 countries by drawing on the most recent data related to the impacts of climate change on marine fisheries. Building on the Intergovernmental Panel on Climate Change framework for vulnerability, we first construct aggregate indices for exposure, sensitivity and adaptive capacity using 12 primary variables. Seven out of the ten most vulnerable countries on the resulting index are Small Island Developing States, and the top quartile of the index includes countries located in Africa (17), Asia (7), North America and the Caribbean (4) and Oceania (8). More than 87% of least developed countries are found within the top half of the vulnerability index, while the bottom half includes all but one of the Organization for Economic Co-operation and Development member states. This is primarily due to the tremendous variation in countries’ adaptive capacity, as no such trends are evident from the exposure or sensitivity indices. A negative correlation exists between vulnerability and per capita carbon emissions, and the clustering of states at different levels of development across the vulnerability index suggests growing barriers to meeting global commitments to reducing inequality, promoting human well-being and ensuring sustainable cities and communities. The index provides a useful tool for prioritizing the allocation of climate finance, as well as activities aimed at capacity building and the transfer of marine technology.